Simon Waller reflects on the The Business Romantic Tour in Australia and the call for a new radical humanism. 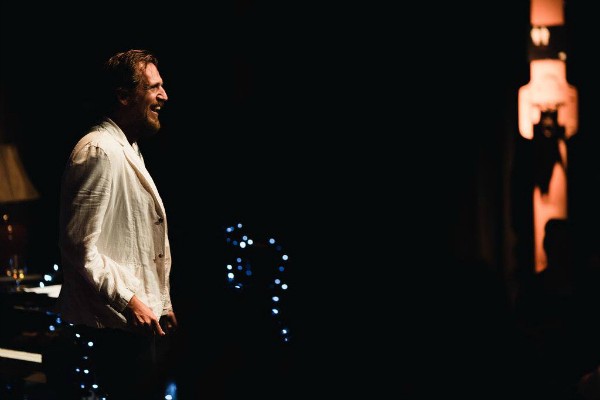 In a month or so I’m delivering a keynote entitled ‘Will technology make us more human?’ It’s a keynote I’ve had in my speaker guide for over a year but until now, no one has actually booked me to deliver it. I’m not sure why that is. It feels like a discussion that many organisations need to start having. There is a very real risk that, without clarity on what we want from our technology, we will ultimately accept anything we are given.

When you delve into any news reports and research about our emerging but unknown future, a future where we face being outsmarted by our technology, you piece together a story that goes something like this. Sometime in the next 15 years you have at least a one in three chance of losing your job to a robot or AI. This will be a challenging time, you might try and re-skill into something more current like coding (it’s the new blue collar work) but as technology keeps getting better it will be hard to keep ahead of AI. At some point 20 to 30 years from now it will be deemed that the singularity has arrived, meaning that Artificial Intelligence has surpassed human intelligence at which point we will either need to merge with AI if we want to remain relevant or face becoming technology’s ‘pet’.*

*On the flip side of this doom and gloom is the argument that many of the jobs that face being automated weren’t that great anyway. And I’m not just talking about monotonous factory work, the good news is many lawyers and accountants face automation as well.

But something important is missing from this view of the future, and that is…why? What’s the point of all this technology driven productivity? What is it that we want out of life? And before we decide to merge with AI or upload our consciousness to a hard drive, what will we potentially lose or leave behind?

At the core of all this is a question that’s been bouncing around in my head for some time now and that is ‘What does it mean to be human?’ As technology continues to encroach on the activities that we once considered the domain of people, it is reasonable for us to question what it is that makes us special.

Now bear with me. From a philosophical perspective we often use the word ‘human’ in a contextual way. From an evolutionary biology perspective it might mean ’not an ape’ but from a interpersonal perspective it might mean ‘fallible’ (as in ‘we’re only human’). Ultimately, being ‘human’ is being similar to how we see ourselves. Which leads us to an important point, technology will never be human (no matter how good it gets) because it would undermine our own sense of identity. Kiwis hate being considered the same as Australians and Canadians hate being confused with Americans…but everyone would feel a little bit hurt if, during a phone call, someone thought they sounded like an automated answering service.

So, what is human is ultimately defined by what our technology is not.*

*This is compounded by the fact that once we create a technology to do something the value of that thing falls. This is a basic supply and demand equation, technology makes things more abundant and ultimately the value falls. When we didn’t have mechanical tools, physical strength was valued. When we didn’t have calculators, mental arithmetic was valued. And while AI is still in its infancy we will still value certain types of knowledge and expertise such as what you learn in eight years of medical school.

In this sense, the definition of humanity continues to evolve. In our not too distant past, physical prowess paid a far more significant role in defining our humanity. The Alpha Male is a throw back to when the ability to lift heavy things and swinging them around your head (like, say, a sword) had a significant impact on both our personal success and our value to others. But with the advent of steam power and the flourishing of mechanical technologies, physical strength meant less and less.

In fact, with the first industrial revolution came a revolution in humanity. We came to value people for their brains more than their bodies. Bodies couldn’t compete against the technology of the times and as a result brains became the new competitive advantage.

In his book Unnatural Selection: Why The Geeks Will Inherit The Earth author Mark Roeder argues that many traits that were previously considered detrimental to human survival such as Asperger’s syndrome, ADHD or being on the autism spectrum have now become an advantage. This is not to say that physical appearance no longer matters, but rather that ‘the book’ is not ‘the cover’.

But this is neither the end of evolution in either technology or our definition of humanity. The rapidly emerging field of AI is casting a shadow across what were once greatly valued mental feats. We can no longer compete again computers in Chess, Go* or Texas Hold ’em. Computers are helping diagnose cancer, completing our tax returns and even recommending where we can get the best Chinese food.** So if the geeks can’t outsmart our technology who get’s to inherit the earth?

*It is interesting that during one of games between the world champion of Go and Google’s Go playing AI, Alpha Go, a response to one of the moves by European champion Fan Hui was “It’s not a human move. I’ve never seen a human play this move”
**In fact that’s all being done with just one AI called Watson. Just don’t ask Watson what’s for dinner, his food suggestions have been generally less than appetising.

Notwithstanding the potential risks to the very survival of the human race that unfettered AI brings, it is perhaps time to once again redefine ourselves and embrace the next chapter in human evolution. Just as in the past, the things we will value going forward, the things we will choose to associate ourselves with, are the things that our technology can’t do for us. This will include traits such as empathy, love, ingenuity, ethics and, perhaps even romance.

Which is a lovely segue to the Business Romantics.

Perhaps the highlight of my last two weeks has been The Business Romantics tour I went to last Friday in Melbourne, The tour was hosted by Mel Grablo of Talking Sticks and Mykel Dixon and featured the amazing Tim Leberecht. What was truly inspirational about this event was not just the content (which could have just as easily being downloaded via YouTube or read on a Kindle at greater convenience) but Mel and Mykel’s commitment to creating an event that rejected established norms (read logic) and catered to an emerging humanity.*

*For someone who speaks at a lot of business conferences it was the first time I’d seen a three piece band to accompany the speakers, a host with a grand piano, a resident artist, an unscripted half hour slot for audience contribution…and a whole lot of wasted catering when this overtook the afternoon tea break.

In his keynote Tim made one particular point that stuck with me. The Romantic period of art and literature was a direct response to the obsession with empirical evidence and the scientific method that emerged during the industrial revolution. We are now in the midst of a new industrial revolution (the fourth apparently) and echoes of the same overt focus on productivity, logic and data can now be seen throughout society’s (and most strongly in business).

But just as data and logic failed to complete our understanding of humanity 300 years ago I believe it will fail again now. This is not to say that there isn’t value in scientific pursuits but rather that parallel to these pursuits we need something else, something more, something that is difficult to automate and therefore retains it’s inherent value.

Our value has always been in our humanity, even if our understanding of what this means has changed over time. I believe we all need to start exploring what we want humanity to mean next. Failure to do so leaves us open to both replacement and control by AI and other emerging technology. In which case, we better hope our future AI keepers like having pets.

This article appeared first on Medium.