What I Learned From Preparing For My TED Talk 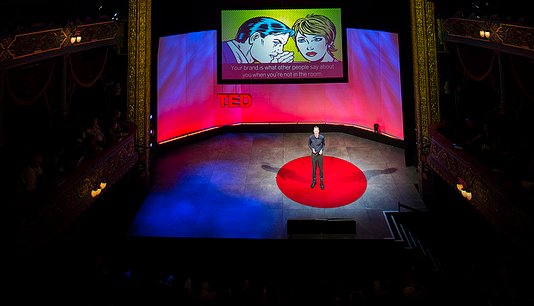 I always thought that speaking in public is a matter of life and death. I’m probably not alone in being afraid of audiences, but at the same time, I find them extremely energizing. An evolutionary psychologist once taught me about the importance of “critical events.” He pointed out that since we humans now live in an environment that is overall significantly safer than that of our ancestors, we lack existential challenges that assess our fitness and give us any sense of achievement, of feeling alive. So we go mountain climbing, bungee jumping, sky diving, on triathlons or…we give a TED Talk.

This Wednesday, at the TED conference in Vancouver, it will be my turn—as part of the TED University session in which attendees have the chance to present six-minute talks. I spoke at TED University in 2012, and although I have had this experience before, knowing what I was in for made the preparation even more challenging this time. Preparation is everything. And it doesn’t stop once you’re on stage. One point prepares the next, one move leads to the next, one moment of breathing makes space for the next. You prepare and prepare and prepare—until the final applause.

Here are a few other things I’ve learned:

Get to the heart of it

It is stunning how much content you can condense into a six-minute talk. What you decide to exclude is just as important as what you decide to include, to paraphrase Chris Anderson, the curator of TED. As William Faulkner once said: “In writing, you must kill all your darlings.” Usually, when you feel really strongly about a certain line, it’s a sign that it might be meaningful to you (because of some intimate connection only you feel), but not necessarily the audience. My favorite TED Talks are the talks that are radically open by being radically restrained. They create something out of nothing. Sir Ken Robinson, Alain de Botton, or Susan Cain, to name just a few, did away with slides, knowing that there’s nothing more persuasive, more powerful than the intimacy of one human being alone on stage. It is this vulnerability that makes an audience fall for you.

In the past two weeks I haven’t been particularly social. I used every single minute available and every possible location to practice my talk. It was the first thing on my mind when I woke up and the last thing on my mind before I fell asleep. I gave the talk in the shower, in the coffee shop, in the car, on the subway, over lunch, and over dinner. I presented it to my wife, our five year old, my colleagues, and mostly just to myself, until I had internalized every single word. “Body memory” is crucial when you memorize a talk. Your lips, your tongue, your whole body, not only your brain, need to get trained on the same words over and over again (and if you edit and change some, it is fascinating how attached your body is to the previous version; it takes several rounds before it catches up with the new version).

Rehearsing really only starts a couple of days before you give the talk. It means delivering the talk under live circumstances, ideally in front of a test audience. One thing I always try to do is to invite a few friends two nights before “game day” and give the talk to them. It’s a bit awkward to “perform” in front of people you know well, but friends are often the most honest critics and a really good stress-test for your delivery. By the way, there’s a difference between practicing and rehearsing. You cannot over-practice. Do it until you get blue in the face and can juggle three balls while giving your talk. Practice until the talk is in your body. But make sure you don’t over-rehearse. You don’t want to sound rehearsed or too slick or polished.

I tried to keep my TED wardrobe pretty simple. All black, and you risk looking like a floating head against the black background on stage. Stripes can wiggle and waver on camera. While I momentarily considered dressing like a Romantic poet (inspired by the topic of my talk this week…), I didn’t want to be remembered as the guy who wore the “puffy shirt” on stage at TED. Fortunately, the New York Times ran a piece on what to wear when you speak at TED which was a good reminder to keep it comfortable and within the realm of what I wear normally. In honor of my German heritage, I’ll wear a shirt and pants from Boss. Moreover, the store’s dressing room offered the perfect chance for a quick dress-rehearsal: With the lights, the reflections, you can see yourself at every angle that the audience might.

Some people will advise you “just be yourself.” But there is no such thing as being yourself on stage. It’s a performance, after all, and there’s nothing wrong with putting on a stage persona. It is an extreme situation. I know my mouth will be extra-dry, I will swallow a bit more often than usual, and my heart will be pounding. And there is only one comfort: you’re not the only one. One of the most beautiful things as a TED speaker is to see your fellow speakers repeat their talk mantra-like in the hours before their slot. When you run into them in the hallway before their talk, they all have this weird expression on their face, and the talk is already on their lips.

The distinction of outstanding speakers like Malcom Gladwell, Amy Cuddy, Brené Brown, or Seth Godin is that they have the confidence to write, practice, and rehearse a talk—and then deliver it in a way that makes you feel as if they just came up with it. This is a talent you can’t just learn within a few weeks, no matter how much you prepare. They are pitch-perfect, of course, but also have the ability to celebrate pauses and dwell on every moment on stage, holding both words and space for the audience with great authority.

The rest of us deliver our lines, hoping that somehow, magically, it will all work out.

Tim Leberecht is the author of the book The Business Romantic and the chief marketing officer of NBBJ, a global design firm. His 2012 TED Talk “3 Ways to (Usefully) Lose Control of Your Brand” was viewed more than 800,000 times. He will speak at TED University in Vancouver on Wednesday.