Four ways for business leaders to enable their workforce for the Fourth Industrial Revolution. 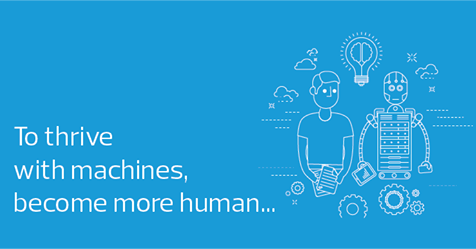 While some cry foul and worry about the woes of a ‘useless class,’ as the historian Yuval Noah Harari puts it, others welcome widespread automation because they consider most current human labour mind-numbing. The economist David Graeber even speaks of ‘bulls**t jobs,’ claiming that capitalism has created a system of faux jobs that we only maintain so that corporate overlords and supervisors remain in power and control, while at the same time providing  workers with a fake sense of value and meaning. Graeber cites a study that says only 20 percent of all employees believe their work makes a meaningful contribution to the world, a number that appears to correlate with Gallup’s finding that only 15 percent workers worldwide are fully engaged at work.

“We were dreaming of technology making us more human only to realise that it may have turned us into machines ourselves.”

Narrowly focused on scaling efficiencies, digital technology has not alleviated this sentiment. Employees are now drowning in a flood of collaboration tools like Slack, not to mention the new demands of self-optimisation propelled by the apps of the quantified workplace and quantified self movements. We have come to realise that Silicon Valley’s recipe of disruption (‘break things’), solutionism (‘there is an app for it’), and transhumanism (enhancements of body and brain, eventually leading to immortality) may erode our very humanity instead of nurturing it. Not to mention the threat of ‘malicious AI‘ that a group of reputable researchers warn us of. Increasingly, we recognise that we have set in motion a process in which we compete, at an unfair disadvantage, with ever smarter and more efficient AI and robots, constantly maximising and optimising ourselves to be fitter, healthier, happier, and more productive.

“The digital economy threatens to turn employees into products which don’t function particularly well and can’t be fixed or returned to the shop.”

This brand of Digital Taylorism—processes that datafy and dehumanise workforces—represents the ultimate digital disenchantment: we were dreaming of technology making us more human only to realise that it may have turned us into machines ourselves. For we have more data— and thus more uncertainty—but one stat is unambiguous: productivity is down in most Western societies despite digital optimisation, wealth distribution is lopsided, and indices of wellbeing look grim, with loneliness and depression rates interlinked and surging. The World Health Organisation reports that, aside from the human misery, global failure to tackle mental illnesses cost economies nearly one trillion US dollars a year in lost productivity, and as a sign of the times the U.K. has recently installed a Minister of Loneliness. The digital economy threatens to turn employees into products which don’t function particularly well and can’t be fixed or returned to the shop.

So, the need for business leaders to make work more humane is more urgent than ever, but it doesn’t simply mean preserving human labour against automation at all costs; rather, it means allowing employees to be more human by honing the skills that clearly differentiate them from machines, so we can add value and enable workers to thrive.

Here are four of them:

First, enable your teams to become entrepreneurs of their own lives and think of their careers less as linear, progressive trajectories and more as portfolios to which they constantly add new skills, projects, and experiences. They may have to go on detours, in fact, detours may be the only path forward. Furthermore, instead of homing in on one expert skill, we must encourage them to become ‘neo-generalists,’ as the futurist Kenneth Mikkelsen argues, and fight their natural impetus to compartmentalise and categorise work.

As the entrepreneurs of their careers, or intrapreneurs within our organisations, they will enjoy more freedom to make decisions and shape their own work lives, but we also need to learn how to help them deal with the new pressures this brings. While we tend to glorify the entrepreneur, not everyone is born to be one, and it can be a long and winding road. ‘I remember all the great moments of glory I experienced in my life as an entrepreneur,’ Holly Tucker, the famed founder of notonthehighstreet.com, a digital platform for small businesses, said at a conference, ‘there were six.’ What is in scarce supply is not the motivation to think and act like an entrepreneur, but to truly acknowledge the strings attached and to be emotionally prepared for them.

Indeed, from early childhood education to vocational and on-the-job training, we must teach not only a new digital literacy but also a new form of emotional agility, to borrow a term from the psychologist Susan David. This will be especially important because in the future workplace, transitions—or liminality, as scholars call it—will be the only constant, due to ad-hoc networks, the rise of the gig and freelancer economy, and higher fluctuation of jobs. We will constantly be in the between-world: between jobs, between projects, between agendas, between worlds (digital and analog, machine and human, virtual reality and real world). We will begin more often—in fact, one could argue we will always be absolute beginners, amateurs in everything, given the accelerated pace of technological development. And we will end more often, too. Losing will become our modus operandi. We will all lose: continuity, stability, certainty, identity, control, and authority. Managing this new grey zone, and the experience of loss, will require a high degree of emotional agility. Every team member must be able to have their hearts broken by work—because only then will they be passionate about it and feel fully alive—and still land on their feet.

Emotional agility will also help those that lose their work as the center of our lives. David Graeber’s recommendation is to compensate the loss of structured routines and identity caused by automation with a renewed sense of personal purpose, helping people shift from being useful workers and consumers (a fairly recent historic phenomenon) to purposeful citizens and designers of their own lives.

This will necessitate a new form of time literacy, in particular the ability to create and enjoy quality time (what the Greeks called ‘kairos’) as opposed to the notion of industrialised, digitalised efficient time (‘chronos’), which will increasingly be machine time. All professions and industries focused on helping humans spend their time more meaningfully (travel, hospitality, life coaching, sports, hobbies, culture, learning, entertainment, etc.) will flourish in the future.

Activity alone won’t make workers happy though, in fact, as studies show, deep connections and friendship are key to wellbeing. What we need more than ever is true emotional intimacy. Intimacy requires the imagination to see the world through the eyes of the other. If data was the currency of the knowledge age, imagination will be that of the machine age.

Imagination of course is a domain of the artist, and the most valuable skill set of the future will be exactly the kind of naïve artistic imagination that is not just capable of coming up with practical creative solutions to complex problems, but, more importantly, can create new, strange, and different worlds for us to explore and build. The future of work will be a blank canvas—for all of us—and only if we empower our employees to think like artists will they be able to fill it with meaning.

Platforms such as The Age of Artists, collectives such as the Berlin-based Artistic Intelligence, or ‘enterprise artists’ like the Australian Mykel Dixon are all practicing and promoting this kind of ‘art thinking,’ as the author Amy Whittaker coined it in her book. Technology firms are catching up, too: Bell Labs has invited a group of artists-in-residence to explore the emotional and social elements of human-machine interactions, specifically the nuances of mood that smart devices often fail to capture. Artists are masters at reading and generating moods as well as creating deep emotional connections.

From permanent entrepreneurship, emotional agility, personal purposefulness, to artistic imagination: the most effective way to thrive as humans in the face of and in tandem with machines is to constantly advance our humanity. Management guru Tom Peters even calls for an ‘extreme humanisation’ of business. It means refining our very own human capacities so we can confidently embrace co-working with AI and robots. It means empower those around us to explore and expand their interior worlds which management has so long neglected.

This article appeared originally on RSM.