What is the End of Automation?

Intelligent automation and beautiful business, robots and romance: these are rather odd couples, but Tim made their very dichotomy the whole point of his keynote presentation at the FORA (Future of Operations in a Robotic Age) Summit hosted by analyst firm HfS Research in New York City on March 7-8, 2018. In order to thrive and maintain our humanity in a robotic age, he argued, we must endure the tension between seemingly opposed ideas, embrace ambiguity, and foster purpose, intimacy, diversity, and passion. He encouraged the 150 attendees – global operations leaders from Fortune 500 firms such as Google, KPMG, Deloitte, Swiss Re, or IBM as well as IT services, automation, Business Process Optimization firms such as Automation Anywhere, Accenture, Wipro, Genpact, or Sutherland – to think beyond the latest fad and devise automation strategies that do not lose sight of the overarching goal: human progress. He emphasized the importance of organizational transformation at human scale, with a particular focus on the emotional undercurrents of business decisions and interactions.

In advance of the summit, Tim was interviewed for HfS’ blog: 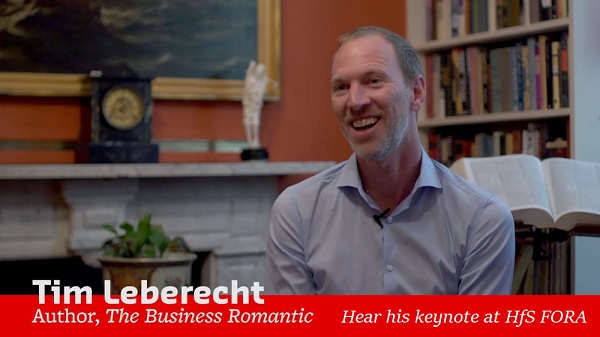 Phil Fersht (CEO, HfS): Tim, we’re very excited to have you as one of our keynotes in New York.  So maybe you can give us some insight into how you have become a “Business Romantic.”

Tim Leberecht (Founder of The Business Romantic Society): Education-wise, my background is in the humanities and professionally, in marketing. Initially, I set out to write a book about meaning, and specifically the power of brands to serve as one of the few remaining arbiters of meaning in our societies. As I was looking into the principles of meaning-making, I realized that they were all, in effect, romantic principles: keep the mystique, foster intimacy, embrace solitude, seek adventure, suffer (a little), and so on. I had this epiphany: “Wow, I am a romantic!” In fact, I realized that romance had been the defining quality of my career—I just hadn’t been able to articulate it. The term “Business Romantic” nailed the tension I had felt all my professional life, and since the book came out in 2015, it has proven to be provocative and fruitful. Opposites attract, or as one of the interviewees for my book said: juxtaposing opposite poles make each of the poles more attractive. I haven’t met anybody yet who hasn’t had a strong reaction to the word “romance:” people either oppose it or aspire to it.

Phil: So the theme of the conference is “Learning to Change in the robotic era”… what’s your view on how we humans must adapt with all the technological change occurring? Is it more about attitudes that skillsets?

Tim: It’s both, Phil. There are some grim reports out there, such as Bain’s recent study that predicts 30 percent of all US jobs will be automated by 2030, with the rewards of automation going mostly to the top 20 percent of earners or savvy AI investors. McKinsey estimates that 30 percent of 60 percent of all tasks in existing jobs can already be automated. Futurist Gerd Leonhard proclaims that “if you can describe your job in one sentence, chances are you might get automated,” referring to the high likelihood of process-oriented, linear, routine-based work being automated.

Entire professions will feel the consequences: not only factory workers or call-center agents but also legal research assistants, accountants, notaries, investment managers, or management consultants. While exact estimates are still disputed, clearly, massive changes to work and society are underway, and we are just beginning to grasp them. AI will dramatically alter both process and offerings in almost every industry. Every profession will have to evolve and embed AI and robotics in their processes.  AI and co-bots will become our new co-workers, and those parts of our work that can be done more efficiently will be taken over by them. Many of us will lose traditional employment, the rest of us will have to get used to hybrid work environments and collaborating with AI (and perhaps even having AI’s as bosses).

We’re definitely in a race with the machines, and it’s not one we can win unless we remind ourselves of our inherently human qualities that AI isn’t able to emulate yet: vulnerability, imagination, and character. We are elusive, inconsistent, elastic, and often erratic beings—we remain unpredictable and can change our beliefs and emotions. That makes us hard to deal with but also constitutes the very engine of progress. It’s not technology, it is our changing hearts and minds, our ever-evolving values, that is the source of innovation.

We will need to acquire not only new technical skills, but also new emotional ones, as we’ll be facing an increasing loss of control, of agency in the traditional sense. Deloitte says that 63 percent of businesses need leadership skill development for the digital future, and that many of these skills are “soft skills.” Our identities and interactions will become more fluid, as boundaries between man and machine, internal and external reality, digital and physical world continue to blur. To thrive in this age of machines, we will have to learn (again) to appreciate beautiful work and how to our work beautifully—with heart, character, and intuition. This what romanticism can teach us.

Phil: And what’s your view of this “singularity”?  Is it real, Tim, or just hype?  What is the real pace of change and disruption, as you see it?

Tim: Let’s say it is a real possibility Phil. AI is already capable of solving complex problems or performing analytical knowledge work such as legal research or content analysis. It can now learn on its own (e.g. Baidu’s Deep Speech technology can acquire a new language in a couple of hours virtually without any human oversight) and even be creative. For example, AI can compose and perform entire symphonies based on musical patterns it has studied. Or take the phenomenon of fake video created by deep learning algorithms that superimpose faces and audio on real recordings—with disturbing use cases in porn as well as politics. In architecture and design, too, it is becoming harder, if not impossible, to distinguish man-made from machine-made creations, whether it is the kind of computational design used for buildings like Amazon’s new HQ or the Shanghai Tower, or Airbnb developing an AI-based product design service that converts design sketches into prototypes without any human oversight. Amazon has even developed an AI-based fashion designer. Plus, AI can now create and train its own AI, as Google recently announced.

Just last week, a collective of leading AI researchers and civil society organizations sounded alarm about the accelerated development of AI and urged human regulation and common standards. Much of the immediate doomsday scenarios may be overstated, but AI is certainly on a fast track to morphing into Artificial General Intelligence that could potentially overpower humans—not because it outperforms us in every single dimension of our intelligence, but because it may disrupt enough of our social fabric and humanity to throw us into catastrophic turmoil.

We will need to find a way to redistribute wealth to avoid growing social divides and unrest, as well as the phenomenon of a new class of dispensable workers (many of them, as recent study by the World Economic Forum has shown, will be female workers) – a new “useless class,” as Yuval Noah Harari calls them. Universal Basic Income is a promising policy idea to allow for the decoupling of income from prosperity and wellbeing and to reduce economic anxiety.

Phil: So what can we expect you to talk about in Manhattan next week?  What do you hope enterprise operations leaders can take away from your session?

Tim: With transaction costs lowered by digital technology, and technologies like AI and Blockchain democratizing and virtualizing transactions, the role of the traditional corporation will diminish. We’ll witness the continued rise of the freelance/gig economy (the fastest growing part of the labor market in the US and Europe), with ever more flexible work structures, alternative currencies (cryptocurrencies like Bitcoin, but also an appreciation of intangible assets such as identity, reputation, personal brand, relationships, etc.), as well as growing volatility and fragmentation of work. There will be more project-based work or so-called “flash organizations” that assemble ad-hoc and only for a specific, temporary purpose.

I am a romantic and remain optimistic about the future, but I want business leaders to realize what’s at stake: not just our jobs, our very humanity. Now is the time to explore new paradigms and tools of value creation, to (re)define success on human terms. Operations leaders, in particular, bear an enormous power and responsibility: many of the jobs that will be automated are in their domain, and they need to find ways to reskill workers and help them prepare them for the new world of work—technically, intellectually, and emotionally. They will have a lot of big decisions to make in the next few years, and I hope that they will make them not only with an eye on the bottom line but on the prolonged health of their businesses and our societies.

Phil: Terrific discussion, Tim.  Can’t wait to hear you next week at the big summit!