Review of "The Business Romantic" by Tim Leberecht 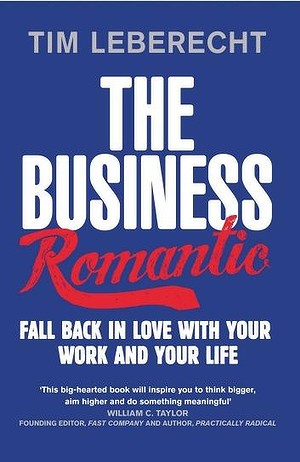 With banners, posters and badges, a film training school near where I live urges its students to “Do What You Love”. The point of The Business Romantic is a corollary; Tim Leberecht wants us to try really hard to love what we do.

Aged only six, Leberecht started his own imaginary corporation. He is now the chief marketing officer in a design and architecture firm based in San Francisco. Whiffs of what might have been a gee-whiz, try-hard kid surface in The Business Romantic. Moreover, as further testament to worthily earnest sentiments, Leberecht announces early on that: “As a marketing executive, I view business as one of the greatest adventures of the human enterprise – if not the greatest.”

There are, happily, a few more – less prominent and less preachy – sides to Leberecht. To the story of the imaginary corporation and the declaration of business as adventure, he adds an unabashed, unashamed romanticism. That romanticism reflects in part a sober, sobering judgment on the drudgery of modern life. Leberecht notes that a 2013 Gallup poll, conducted in 140 countries, concluded that a mere 13 per cent of workers were at all enthusiastic about their jobs. He wants us to do better than that by converting ourselves into business romantics.

A business romantic apparently would dispel any dreary drudgery by commending intimacy, mystery, devotion, vulnerability and lots of other non-bottom-line attributes of the same ilk. Sceptics might argue that praising “the wondrous, the delightful, the mysterious” in business might represent a short-cut to a sacking. Leberecht thinks quite differently. He is well-read, and has stuffed his book with often-touching anecdotes about workers who have managed to do what they do and love what they do.

Although brains, start-up capital, technical skills and entrepreneurial flair seem to have played their due part in those success stories, Leberecht may have a point in insisting that leap-in-the-dark romanticism contributed as well. He is unfailingly breezy and optimistic. “The greatest threat to a Business Romantic [Leberecht’s capitals, not mine] is cynicism.”  His business models are happy rather than happy-clappy.

Having one, relatively straightforward, sometimes-obvious point to make obliges Leberecht to ring the changes with his raw, Business Romantic material. He takes time to inquire into the thinking of a Buenos Aires inventor who did not like his shoelaces. He asks why folk appreciate conferences held in inaccessible, inconvenient spots. He  draws a contrast between magic, on the one hand, and “a series of stark data points and engineered touch points” on the other.

Banality occasionally intrudes. Leberecht’s Business Romantic “playlist” includes a book he admits to never having read, nor even having held in his hand. He opines that “sometimes happiness is as simple as hearing your own name”. He permits himself a rhapsody about “the divine geometric beauty” in a game of soccer.

Will any of this stuff help a company’s bottom line? Conversely, are Leberecht’s maxims any more foolish and fanciful than those to be found in G-Major management textbooks? The book is worth reading for its wealth of well-told stories, as well as for the ever-so-slightly infectious enthusiasm of its author. He, at least, certainly does what he loves.

This review appeared in The Sydney Morning Herald.