Love Songs From The Business Romantic 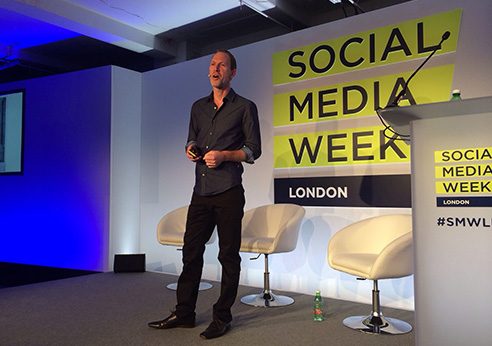 Even though Tim Leberecht just published a book called The Business Romantic, his first date with the Social Media Week London crowd got off to a rocky start. He was just, he announced, recovering from a bad bout of food poisoning and hoped the audience would forgive him for low energy or even outright unconsciousness.

Not the most romantic beginning.

Still, he made up for it was a sharp, insightful talk that oozed like Barry White over the jangled nerves of an audience saturated with data-heavy business dubstep. “What,” he asked, “would the romantics make of our smart, connected, quantified age?”

Would they approve of the algorithms that automatically recap our past year for us, heedless of the pain they may force us to relive? Would they be horrified by spreadsheets that enable us to improve our sexual performance with data? Or would they think it’s all some great joke, especially once they hear about Invisible Boyfriend—an app that allows you to rent a fake boyfriend who (who?) sends you fake text messages, emails, and even phone calls.

When everything is quantified and measured within an inch of its life, we will have no more room for the strangeness, the magic, the romance. “We are in danger,” Lebrecht warned, “of engineering the romance out of our lives.”

We seem to face this crisis of disenchantment every 100 years. A century ago it was Taylorism (AKA scientific management). One hundred years before that the Romantic Movement arose in reaction to the Enlightenment.

Lebrecht believes we are due for a new Romantic Movement, one which will be born out of frustration with the quantification of everything in our lives. Interestingly, he believes this new romantic movement must arise in business, since that is where we spend the majority of our lives, and that it must be led by what he calls the Business Romantic. (For similar thinking, coming at this from another angle, please check out the Telosity series on ogilvydo.)

While it can be hard to define something that has not yet fully emerged, you can, as Lebrecht shows, define the conditions under which it will appear. These are his Rules of Enchantment, and if you feel a certain longing for more humanity, ambiguity, and mystery in your life (and see a competitive advantage in importing those unquantifiable elements into your business), then these rules are for you.

Rule 1: Find the big in the small.

The average American has only one close friend, Lebrecht reported, a number which has declined in recent years. We’re connected beyond our wildest dreams, but we’re bereft of intimacy. Products and services are emerging to cater to this yawning need. Good old fashioned dinner parties are on the rise, both informal and organized. I Am Here app puts people together in New York City for 8 hours—no digital devices allowed. We must learn to value the small, intense moments once again.

Secrecy and mystery make experiences meaningful again. When everything is open, nothing is open. Secret Cinema invites people to see a movie, but the details are kept hidden until the last moment. Or consider Bansky’s Dismaland—a limited, ephemeral experience. Is the draw the satire? Or is it the impermanence?

Perhaps the success of SnapChat gives us that answer. Mystery rooms and secret rooms, once very popular, are coming back into vogue. “Making the familiar strange again, accessing different worlds, taking on different identities—these are all very romantic traits,” Lebrecht maintains. “AR and VR,” he continued, “are the new romantic technologies. They can out you in the shoes and the lives of others, which is the essence of empathy.”

“Romance is not identical to happiness. There is a dark side.” That should be clear to any of the lucky visitors to Dismaland. That is inimical to the way we design all of our customer experiences. We bake in satisfaction and ease of use.

And yet, “evolutionary psychologists will tell you out brains are still wired for he Stone Age.” We long for existential, life threatening, critical events that give our lives meaning. We have banned them from our modern world except when we go seek them out directly. We go bungee jumping. Or to Ikea? Lebrecht tells us that Ikea has mastered the art of frustrating its customers. From the names of the furniture to the elliptical directions, the Ikea experience is a suffer-fest. And yet we keep coming back. Maybe Lebrecht is on to something.

There are some great examples of business romanticism already in place. Consider loyalty programs. Those aren’t about instant gratification. In fact, they foster permanent unfulfillment—a romantic notion if there ever were one. Or take Airbnb. While it is data heavy in its operation, it is romantic at heart. It engineers strangeness and surprise into every stay.

Romanticizing and humanizing business is a philosophy that pays off. “The more foolish, daring and romantic you are,” Lebrecht urged his audience, “the more disruptive and innovative you will be.” That sounds like an idea to love.

This article first appeared on Ogilvydo.