Gray Must Remain Our Sacred Space

In response to the Paris attacks, we must embrace tolerance and multiple truths. 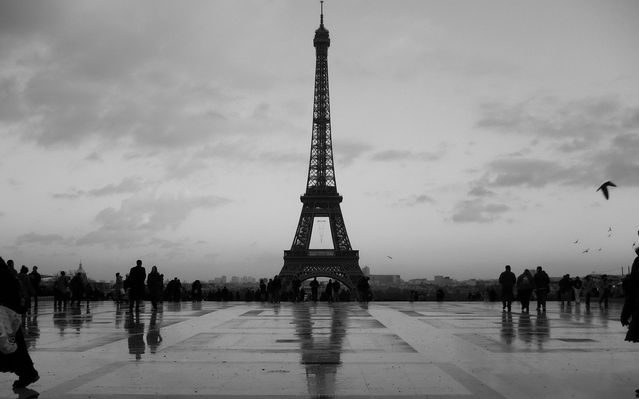 The evening before the attacks in Paris, I stood in the penthouse apartment on the 72nd floor of a skyscraper in downtown Manhattan and gazed through the massive window at the nearby Freedom Tower. The apartment was the residence of the Danish Consul General in New York who, together with Performa 15, was co-hosting a performance dinner featuring the Danish artist Helene Lundbye Petersen.

Titled “White Book Performance Dinner, Silent Edition,” the event was named after the first of Helene’s series of monochromatic books that represent the color spectrum and consist of 11 calligraphic manuscripts — handwritten pages that she later printed as books and turned into artworks. She considers them a “mythology on our current condition of life” that suggest a way to “criticize, deconstruct, and eventually comprehend contemporary life through five fundamental aspects”: Wisdom, Pleasure, War, Love, and Balance, embodied by five goddesses. The books — from On the Beginning to Ode to Pleasure to Ode to Battle to eventually On Death — contain, as she claims, all the knowledge and wisdom the world needs for tackling its biggest issues. While this may sound grandiose and perhaps a bit naïve, Helene’s ambition stands out as a monolithic force of radical, galvanizing clarity and irresistible conviction in a time of growing complexity, wavering, and moral confusion. The White Book is the bookend of the series, the book of books, and Helene performs it in different settings, often collaborating with chefs.

The Manhattan dinner, staged in partnership with acclaimed chef Mads Refslund, was a delicate 10-course affair interspersed by citations, with both food and food for thought. Helene had removed all the paintings from the walls of the apartment, which were now just plain white, like everything else in the room: the table cloth, the chairs, the candles, the lights of the city. In the invitation, the 30 guests had been instructed to wear festive white (or black) clothing but had otherwise been left in the dark as to the purpose or structure of the evening. Then Helene appeared, like a goddess, dressed in a swooning white dress, and began the performance by whispering a brief line into the ear of each guest in an act of forced intimacy. With the undisputed authority of someone who claims it, she remained the center of attention and the principal of action throughout the evening. She was never at risk of losing control because she was never afraid of losing control.

And yet, while her presence was monolithic, the theme singular, and the decor stark, the dinner was everything but black and white. Instead, it was a powerful statement against the idea of a singular truth, against the binary code of exclusion and identity. It served as an homage to the implicit, unsaid, intangible, and wondrous — the inhabited and uninhibited territory between our words and articles of faith. A mystery that refused to be resolved. All aura, all essence. The White Dinner — the blank space — was in fact a wholehearted celebration of the gray, of the space in between.

Artists have always been more comfortable with gray, but the rest of us struggle with it as we seek clarity and orientation. In our Western societies, we are slowly learning to embrace more colors (from race to gender orientation), but we’re still finding it hard to live in the gray.

David Axelrod, the former advisor to President Obama, remarked about the appeal of Donald Trump that Americans might be tired of living in the gray, of the more nuanced way of government that Obama embodies, and are now attracted to a leader who paints the world in mere black and white, “in us and them,” the good and the bad, in winners and losers.

Similarly, much digital technology aims to make the world explicit, quantifiable, searchable, and entirely predictable, dividing it into what is efficient, effective, and relevant and what isn’t. It wants to shine light on everything and considers gray the fog of uncertainty and ignorance, an obstacle to actionable knowledge and informed decision-making.

Yet gray is the color of our freedom. It is “the most important color of all… absent of opinion, nothing, neither/nor,” as the painter Gerhard Richter once said. It is the space of possibility, the pluralist ambiguity that is at the heart of our civilized societies. The romantic hope that another view, another world is possible, or better, that this world is not the only one; that there is always more than one meaning, more than one truth — neither the one truth promoted by scientific, technocratic rationality nor the one truth promoted byreligious extremists. Gray is the stance against a bipolar world, with extreme claims and exponential implications on either side. Living in gray means living uncomfortably in the middle, but it also means living in tolerance and peace. It means commuting between two worlds and leading a double, a poetic life. It means being able to love, to feel everything but not know anything at all, for “it is when we use our mind that we get lost,” as Helene writes in her White Book.

In yesterday’s issue of the New York Times Magazine, the writer George Saunders elaborated on our “increasing materialism”:

”….we are coming to believe that our minds are entirely sufficient to understand the universe in its entirety. This means a shrinking respect for mystery — religion vanishing as a meaningful part of our lives (or being used, in its fundamentalist forms, to beat back mystery, rather than engage it); an increasing acceptance that if something is ‘effective’ (profitable, stockholder-enhancing), then that answers all questions of its morality. This insistence on the literal and provable and data-based and pragmatic leaves us, I think, only partly human.”

The day after the White Book Performance Dinner in New York, the Paris events shocked the world: incomprehensible acts of barbaric, dehumanizing atrocity. Not surprisingly, we are tempted to respond with a black-and-white mindset and eye-for-an-eye action.

This is exactly what jihadists want. Daesh and other groups have consistently promoted a binary world of “believers” and “non-believers” who can’t possibly co-exist. They imagine a world as black and white as Daesh’s flag. They are determined to eliminate the “gray zone.” With the words of Iyad El Baghdadi, an Arab Spring activist who was expelled by the United Arab Emirates:

This is why it is paramount that we strive for the gray. It is a binary, exclusionary worldview that creates disenfranchised outliers, those who feel left out of societies and resort to tribes for a sense of belonging and purpose. Having been denied a gray, they now seek to impose an extreme version of a black-and-white world on us.

Gray is the ideological middle, the political center of most western democracies, and we must not let it be compromised. Matthias Döpfner, the CEO of Axel Springer, which publishes Europe’s most popular daily, Bild, is right when he demands a “radicalization of the center” to combat a further radicalization of the extreme fringes. We indeed need a fuller shade of gray. Fewer tribes and more difficult, daring societies.

Ten days before the attacks I was strolling through the streets of Paris with an Iranian-German friend. We walked all the way from the 11th arrondissement to the Seine, where we marveled at the famous lovers’ locks on the Pont Notre Dame and listened to a young street musician who instantly captured our attention with a cover of Leonard Cohen’s “Hallelujah,” a song like a blank page: so simplistic and essential that one can’t help but stand still and listen and project one’s own emotions, no matter where and when.

In the immediate aftermath of the Paris attacks, social media users quickly fell into two camps: those who wanted to #prayforparis and those who opposed the hashtag, arguing that religion was the root cause of this evil and the last thing we need now.

But here, too, the truth is gray. To combat religious extremism, we need more religion, not less. We need more sacred spaces, not less: spaces for introspection, reflection, and pure, emotional presence. We need more spaces where we can be alone with our loneliness and appreciate it as the foundation for meaningful connections with the other.

We must reclaim these sacred spaces from technology that aims to further secularize our societies through scientific, data-based evidence, the “objectification,” the quantification of everything, and from the religious extremists who want to force a friend-or-foe world view on us and bomb us back into the dark ages. We should allow neither to discredit an old human ritual of meditation that transcends religion in a traditional sense and has everything to do with religion as “connection” (which is the literal meaning of the original Latin term). Whether we’re religious or not, a prayer is the acknowledgment of something greater than ourselves. It is a ritual that allows us to create space for hope even in the tiniest prison, including the prison of our mind. Without hope we have nothing.

We must not be afraid of religion, of leaps of faith, of believing without evidence. We must not fear falling for something, not fear falling in love, with ideas or people, or our own desires. We need more mystery and enchantment, and in a world so cold and complex, warm and fuzzy is not a naïve response, but a moral obligation that creates more shades of meaning.

The conclusions from Paris are all inconclusive, flawed, and incomplete at best. But it is important that we speak up and write down, and fully lean into the discomfort of ambiguity. It is the only and the best thing we can do to keep the gray zone sacred.