Failing Beautifully and Not So Beautifully: FC Liverpool, the Uber IPO, and the UN Extinction Report

What the heroic British football teams in the Champions League, the Uber IPO, and the UN extinction report  tell us about the changing nature of failure. 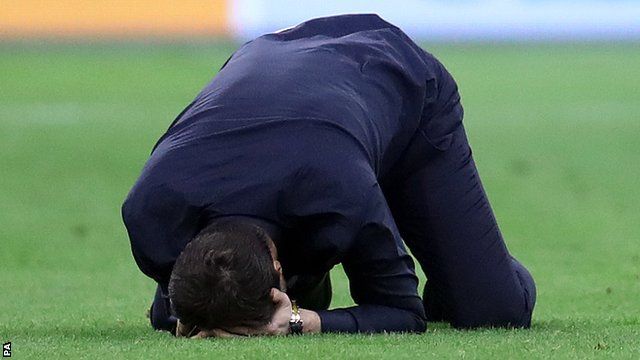 “The end is in the beginning, and yet you go on.”
― Samuel Beckett, Endgame

Last week, a string of seemingly disparate events — the heroics of British football teams in the Champions League, the Uber IPO, and the UN extinction report — gave us a glimpse into the changing nature of failure and why it matters.

For starters, British football teams FC Liverpool and Tottenham Hotspur each achieved epic comebacks in their Champions League semi-finals. Liverpool beat Barcelona 4–0 at Anfield Road, their home stadium, after a 3–0 defeat away, and Tottenham overcame a three-goal lag in the second half of its return game against Ajax in Amsterdam.

Tottenham’s comeback was even more dramatic because the goal was secured in the last play of the game in the fifth minute of overtime. Coach Mauricio Pochettino sank to his knees crying, his whole body surrendering to the weight of the moment.

Likewise, Liverpool coach Juergen Klopp looked ecstatic, but more vindicated than overwhelmed at the final whistle. Before the match, it was reported, he had told his players that they should either achieve the impossible or fail beautifully. The New Yorker took this as a reference to Samuel Beckett’s famous line: “Ever tried. Ever failed. No matter. Try again. Fail again. Fail better.” But it misses the point of Liverpool’s “endgame.” Klopp did not want his team to fail better, he impressed on his team to fail more beautifully.

In the very moment winning was no longer the point, winning became possible.

His phrasing seems a deliberate choice. Sure, we speak of football as the beautiful game, but when it comes to performance, we typically want to fail fast or forward in order to then recover quickly and finally succeed. Klopp, however, had something else in mind. By giving his players the license to fail beautifully, he gave them the freedom to simply go out and feel joy, passion, and exuberance, without the burden of consequence. Whereas the Barcelona players appeared stifled by knowing that they had to win or be completely embarrassed, for Liverpool, the path to redemption was clear: in the very moment that winning was no longer the point, winning became possible.

It turns out, soccer is the game that shows our humanity in the most strident fashion. Machines are programmed to win, but we humans have the luxury of playing just for the sake of play. In a time defined by optimization and reward-obsessed gamification, this — and not just Liverpool’s and Tottenham’s impressive fighting spirit — is what made these games so special.

(A few days later Liverpool would fail to win the national championship, eventually coming in second in a neck-to-neck race with rivals Manchester City.)

Uber and the future of work

There were other losers this past week, namely Uber, the “ride-sharing” company that only plays to win, relentlessly so, in a Machiavellian, Darwinian way. The long-anticipated IPO turned out to be a disaster. After the valuation had already been lowered significantly from the initial goal of more than $100 billion, Uber lost nearly $6 billion in market cap in its first five hours as a public company. While some of stockholders became very rich, the market remained skeptical, it seems, of Uber’s long-term prospects. Even though the company is accused of underpaying its drivers (furious drivers are striking in cities worldwide), it is a far cry from being profitable and only growing thanks to some heavy injections of VC money aimed at killing competition through sheer financial horsepower and blunt policy violations. Uber’s business model will ultimately only work if it replaces human drivers with robots. The drivers will lose out, and so will the public: studies have shown that Uber has increased congestion in cities such as San Francisco and shown that it in fact often cannibalizes public transportation.

In the New York Times, Farhad Marjoo called Uber “a stain on Silicon Valley,” but that seems overly dramatic since most Valley firms follow the kind of “blitzscaling” that LinkedIn co-founder Reid Hoffmann advocates. Facebook is yet another example of it. When the company had the choice between measured, considerate growth and aggressive growth, it chose aggressive growth. Uber is not an aberration, it is the norm, albeit in the most ostentatious fashion, of the Silicon Valley model. The many benefits it has brought are now eclipsed by the growing concern that big tech is ultimately failing all of us.

No wonder tech lash is now a mainstream phenomenon. Even Facebook co-founder Chris Hughes last week joined the chorus of voices asking to break up the all-too-powerful company. Former Google ethicist Tristan Harris bemoans “human downgrading” caused by exponential tech whose sole goal it is to enhance convenience and efficiency, or hijack our attention and extract our data. Tech historian George Dyson warns the AI arms race might lead to the loss of fundamental human capacities, so that rather than outperforming us in the form of super-intelligence, AI will simply have to do tasks we are no longer capable of.

And indeed, it’s one thing to delegate enormously complex mathematical processes to computers — processes that most humans are not capable of in comparably short timeframes — and another thing to have an AI host your birthday party. Often referred to as Moravec’s Paradox, this contradiction holds that it is much easier for AI to take over tasks that are very hard for us humans, whereas it is very hard for AI to perform tasks that are easy and intuitive for us. This has two implications: it is wrong to assume AI will simply automate menial, low-cognition work. Instead, it will replace human labor precisely in those areas where highly skilled workers perform complex cognitive tasks — which does not bode well for many middle-class jobs. Secondly, AI may not dominate us because it outperforms us, but because we increasingly underperform on those very skills that we had thought of as inherently human.

The UN extinction report and the future of our planet

This brings us to the third big news item of last week: the UN extinction report. It pinpoints arguably the greatest failure of humanity, and one that perhaps can’t be rectified: the failure to protect our own habitat. The grim report highlights failures on several levels: a failure of imagination, a failure of empathy, and a failure of willpower.

One million animals and plant species are at risk of imminent extinction, the report claims, with “unprecedented decline” and the extinction rates accelerating. The report states that most of the Aichi Biodiversity Targets for 2020 are likely to be missed and asserts that only “transformative change” can at this point prevent fatal damage to the planet. “This loss is a direct result of human activity and constitutes a direct threat to human well-being in all regions of the world,” one of the authors of the report, Professor Settele, is quoted as saying. But it’s not just human wellbeing that is at stake. It’s the non-human life that we have been entrusted to respect and look after, each of which holding intrinsic value.

Our definition of success must view humanity as something that cannot be gained but only lost.

In the week of Uber’s IPO and the release of the UN extinction report, Liverpool’s and Tottenham’s feats hold some broader insights. Obviously, these three events differ greatly in impact and importance, and it may seem absurd to compare them. Yet the more absurd the juxtaposition, the more truth it may hold in times like these.

So let’s draw some conclusions: the winner-takes-all, blitzscaling mindset that Uber epitomizes creates incentives to win at all costs. It’s a mindset that neglects the beauty of play, that is, the importance of fulfillment without gain. It is bent on crushing competition and extracting value from all parts of the ecosystem.

At the root of this behavior is the idea that success is about winning, and that winning is an end that justifies all means. Yet a society is only as humane as it is not just tolerant, but appreciative of losing. Our definition of success must reflect that, while recognizing that our humanity is something that cannot be gained but only be lost. It is this humility that might help us hold in high regard the fragility of civilization.

Losing is a key sentiment of our human condition. But in the future, it appears, it will become its main function. Whether we like it or not, we are all going to lose, and the losses will be of historic proportions: from large-scale job losses due to automation, to our social contracts due to our obsession with growth, to the ultimate loss — the health of our planet.

Perhaps, we will be able to contain, compensate for, and console ourselves despite some of these losses, but even so, the cure will not come from continuing to win. Neither will it come from failing better, forward, or fast. No, we must learn to fail beautifully.

If winning is no longer possible and if loss is inevitable, then failing beautifully means to engage in a stubborn act of belief in the wake of nearing defeat. It is the final straw of human agency we have left: to surrender to playing simply for the pleasure of playing.

Like Samuel Beckett, the German writer and film director Herbert Achternbusch knew a thing or two about this. In his movie The Atlantic Swimmers from 1976, the two main characters, Herbert and Heinz, are standing by the seashore dreaming of getting away from it all, but there is no ship in sight. Herbert exclaims: “You have no chance, so use it!” and jumps, fully clothed, into the water and starts swimming.

Then the movie ends.

A shortened version of this article appeared on Psychology Today.