A somatic approach to management can help us become leaders who are fully alive. 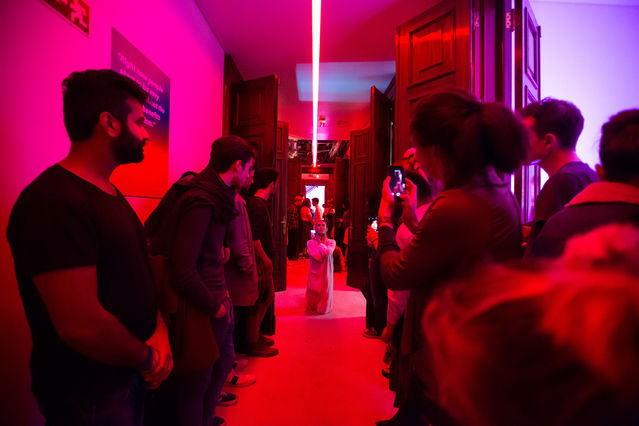 We spend the majority of our waking hours at work, but for the most part, we do it as disembodied brains that we carry from meeting to meeting. In assessing the performance of knowledge workers, we rave about bright minds and leveled heads. Moreover, it has become fashionable recently for us to be encouraged to bring our “full selves” to the workplace, but strangely we often exclude our bodies, even though it is where our emotion and cognition is centered.

Sure, there are now myriad mindfulness initiatives, and a growing number of companies offer daily sports or fitness activities, yoga, or meditation classes, but most of them merely aim to prepare us for cognitive fitness at the workplace, in the sense of mens sana in corpore sano: fit mind in fit body. The idea is that we if invest in our bodies, we sharpen our intellectual abilities, and as a result, we not only make better decisions and are more productive, but we are also happier and healthier at work. As for the body’s role in management, at most, we analyze and improve our body language to be more persuasive or assertive.

Dancing and singing the body electric

Last week’s House of Beautiful Business, an annual gathering focused on the humanization of work in Lisbon, Portugal, that I co-founded and co-curate, reminded me how insufficient our approach still is to a more holistic notion of business that engages the full range of our humanity—including the human body. We optimize and finetune our bodies as enablers of productivity, but we fall short of using them as instruments of understanding, of discovery and learning. At our House event, too, we incorporated physical activities including morning raves, yoga, and running into the content-rich daily program, as well as improvisation and constellation work and other presenting tools, but it was two other physical activities that were more revelatory:

One was an immersive performance created by two choreographers of the National Ballet of Portugal, Xavier Carmio and Henrietta Ventura. They staged an “installation” for 15 dancers in the former executive offices of a Portuguese bank that portrayed—with wild fervor and explicit expressions of violence—a fatal marriage of capitalism and the destruction of our planetary resources. Unleashed, uncontrolled, contorted bodies moved through the narrow hallways of this former corporate workplace, and they were not only in the faces of the 300 participants but also engaged their bodies, turning some of them into ambivalent co-creators and accomplices of this “crime of the century.”

In their performance, the dancers embodied the dehumanizing effects of a market society that puts a number on everything in order to extract value from anything. Stripped of social fabric or civil protocol, they degraded each other to either mere data points or basic bodily instincts. They also projected that capitalism subjugates our bodies to the power structures of patriarchy. It was a heart-wrenching, visceral swan song of “late capitalism” that hit where it hurts. Provoking basic flight-or-fight responses of the limbic system, some attendees left, stunned and appalled.

The abstractions of the talks on stage the previous day had made way for something far more concrete than the most compelling story or a detailed case study could ever provide: our own bodies consumed by an excessive parable on excessive consumerism. The performance deconstructed the façade of “smart” and “appropriate” at the workplace and laid bare the brute forces at work in our economies (of natural resources, human labor, attention, and data). It was a pivotal moment and fundamentally changed the vibe of the event over the ensuing days.

In contrast to the harshness of the dance performance, another, softer feature of the gathering was easier to embrace: every morning we convened attendees to sing together in a choir. In keeping with the theme of the conference, “The Battle for Beautiful Business,” we sang fight songs such as “Bella Ciao,” and it was a highlight for many. One CEO even told us that he had canceled a customer dinner the next day so he could join the choir’s final performance. Vocal cords strung, the whole body in contention, the joy of attuning one’s self to the voices of others, of experiencing the power of a harmonious collective, was an unexpected, simple pleasure for the singers. 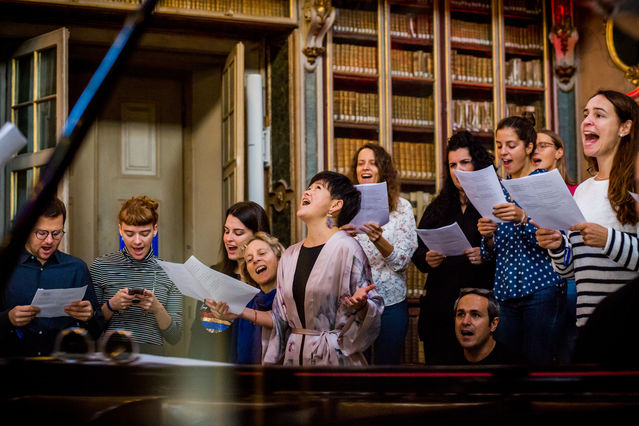 On the last day of the conference, Pete Hamill, an expert in embodied cognition and author of the book, Embodied Leadership, made sense of it all in his talk: “When we experience the threat response, neurons are activated, and hormones such as cortisol are released. However, the effects of these hormones and neural connections are felt in our bodies, below the chin, rather than as an abstract thought in the brain. Learning means practicing situations and experiences of discomfort until you become comfortable with them,” he concluded.

This is of course what high-performance athletes do, but as managers and leaders at the workplace we only rarely practice running a meeting, making a decision, or simply holding tension like we would practice a high-stakes theatrical performance or a 100-meter sprint.

As a communication and speaking coach, it’s often surprising to me how many executives I work with who think that they can simply “wing it” during a townhall with their employees or an analyst call, or think they are perfectly prepared simply because they’ve memorized the meeting agenda and practiced talking points. It just isn’t good enough. The truth is they are only ever able to fully embody their vision and message if they have put their bodies through the motions, if they’ve internalized not just the content but the corresponding movements, if they’ve felt what it feels like to perform an act, a task, a statement.

This is why it’s such a meaningful (and, quite frankly, stressful) exercise for managers to write, rehearse, and perform a short, six-minute talk—something I do with clients to help them find and articulate their leadership vision. The concise format leaves them with absolutely no wiggle room to ad lib a slide-to-slide voice-over. Instead, they have to impress the words and accompanying gestures and stage movements into their body memory. Only once they embody their intentions, will they be credible.

Hamill’s approach is derived from somatic coaching, a field of learning and development popularized by, among others, the Strozzi Institute, that moves the body forward. The term “somatics” stems from the Greek word somatikos, which means “the living.”

As leaders, we will only come fully alive and can make others come alive, if we mean what we say—or in other words (acts!): if we fully embody what we believe in. 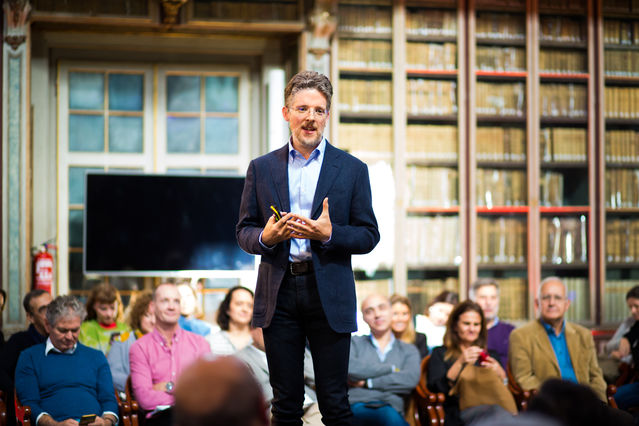 Practice is the goal

The same is true for change management initiatives, all of which are by design massive learning experiences in which usually a large number of workers are asked to acquire new knowledge and skills in a record amount of time. It’s naïve to assume this can happen by simply asking them to glance at PowerPoint slides, browse through manuals, or repeat a new language that they have learned by heart. Rather, they should role-play, enact, and experience the new reality.

Or sing it! I firmly contend that if a workforce forms a choir to sing the new company strategy every morning, adoption rates would go through the roof.

Ultimately, though, if we begin to practice in earnest and make practice our daily routine, we may realize that the deep work we all have to do is not meant to improve the outcome, after all, but lies in the very act of practice itself.

With the wise words of Alan Watts: “We thought of life by analogy with a journey, a pilgrimage, which had a serious purpose at the end…But we missed the point the whole way along. It was a musical thing and you were supposed to sing or to dance while the music was being played.”