Before Going Back to Normal, Can We Please Stay in This Space for a Bit Longer?

At the workplace and beyond, we need new language, new leadership — and more time. 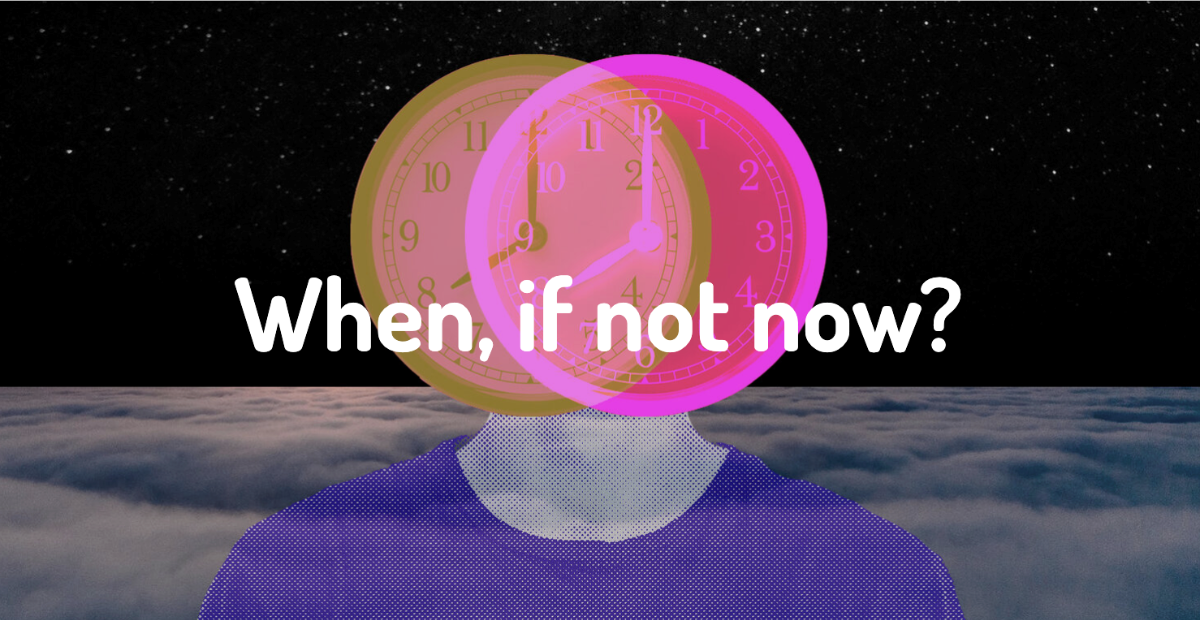 Restrictions are being lifted in several countries, schools and shops are re-opening, and some workers are returning to the workplace. “The summer vacation is safe!”, one German Sunday newspaper’s front-page headline exclaimed.

While this whiff of normalcy is reassuring and comforting for some, it stands in stark contrast to the economic reality for millions of people in Western societies. A record 20.5 million Americans lost their job as a result of the crisis in April, and the short and long-term economic consequences are dire for many, especially those who have already vulnerable.

But even for those of us non-essential workers privileged enough to still have work, the return to normal is disturbing. Many of us don’t want to simply restore; we want to start anew. We don’t want to recover; we want to continue uncovering some deeper truths.

A most extraordinary period to have been alive

One of these truths is that the crisis was exhilarating and vibrant because it made us feel alive. As Geoff Dyer writes in The New Yorker:

“Those of us who manage (…) to come through this without serious illness, the loss of loved ones, or ruinous debt will look back on these ‘dark times’ — as those ‘crazy times’ inevitably became — as a most extraordinary period to have been alive.”

After the pandemic put death front and center in our societies, we are realizing that the return to our workplaces, our old habits, our old lives, is not a return to life — it is a return to death, to the mind-and soul-numbing protocol, process, and language of business performance.

A return to the old routines is also a withdrawal from the essential questions that have emerged from the crisis as it interrupted our daily lives, conventions, and identities. Have we really had enough time yet to mourn our ego-deaths, the loss of control, the fallacy of invincibility? Have we held this liminal space, the in-between between the old and the new, between the false certainty of the past and the uncertainty of the future, long enough? And how, as we pursue our non-essential work, can we stay explorative and imaginative if, as McKinsey dryly postulates, “Recovering revenues is an important element of reimagining”?

From whispers to shouts to essential questions

In a House of Beautiful Business Living Room Session this past week with the transformation consultancy SYPartners, CEO Jessica Orkin and creative director Thomas Winkelmann guided us through a meditative journey, augmented by cello and piano, to “awaken to essential questions,” inviting us to linger in that liminal space where those questions often emerge.” The nearly 300 participants were eager not to go anywhere, many of them even lingered another 12 minutes in order to listen to a cello performance (remarkably, from tape), while just looking at each other in the Zoom gallery that had become our window to humanity.

The session began with Orkin and Winkelmann asking the participants to write down what they perceive as “whispers” and “shouts”: tentative feelings, thoughts, or ideas that are in our minds and that we could amplify into more direct statements. Example: “It’s all going too fast for me right now.” (whisper) — “Slow the fuck down!” (shout). The chat quickly overflowed with whispers and shouts, many of them claiming for more time, for more pause, more holding, more liminal space for the sake of having more liminal space.

Based on this exercise, Orkin and Winkelmann then asked participants to translate their whisper and shouts into “essential questions,” and they ranged from “Will people still be kind to each other after the crisis?” to “How can we sustain this sense of humanity and deep connection?” to “Can we bring the mother archetypes, or one mother archetype, into the boardroom?” and “Is love scalable”?

The two also shared snippets of recent conversations they had had with CEOs and boards of Fortune 100 companies, and the new tone was striking: “Can we be a good company and still be public?” — “Who would we be if we stopped crushing the competition?” — “Could our operating model be seasonal, like nature?”

“Continue listening, write and voice your whispers, and resist — for now — the human impulse to turn uncertainties into certainties,” Orkin said.

In ethnographer Jonathan Cook’s Beyond Back to Normal podcast, Martina Olbertova reminds us that when our movement in space is restricted, our sense of time becomes distorted as well. In conventional business culture, time is money. But our notion of time is shifting — everything is too fast and too slow at the same time. Time, we now know, is not money. It is far more precious.

This has spawned a desire not just for more expansive liminal spaces, but also new words to fill them. In business, more than anywhere else, human language, for the most part, has been abused to fit into little cubicles of meaning that reduce us to consistent, performing selves whose humanity is boiled down to “developing empathy for customers” (but not really for ourselves).

This new language will not come from playbooks, textbooks, or memos, or (most) business books that typically meet militarist stereotypes: the “war for talent,” “crushing the competition,” “targeting,” and so on. Neither will it be provided by management literature of business model canvasses or 2 x 2 matrices that still speaks of “innovation engines,” “disruption,” “unstoppable,” “invincible companies” — terms that seem not just like hyperbole but satire in the light of the past three months.

The last thing we need after this crisis are invincible companies: we need “vincible companies” that are soft and humble, and fragile and vulnerable enough to be able to truly absorb ideas and attune to an energy greater than themselves. Only if they are vincible can they care.

Only poets will make sense of this time

Thus, this new language may only come from poets, “ Chris Fitzpatrick suggests in The Irish Times: “We will need more than a vaccine and a rebooted economy to heal us.” Citing Samuel Beckett’s adage, “Words are the clothes thoughts wear,” he concludes that “our thoughts, like our world, have been turned upside down.”

Strange times ask for strange language, in fact, it may only be answered with the absurd. Mariana Lin, former principal writer for Apple’s Siri, believes that AI is the historic opportunity to expand our language. She refuses to reduce our interactions with AI to mere functionality. For her, the beauty of communication lies precisely in the missteps. “There is something deeply human in nonsensical conversations,” she says.

She refers to the great absurd writers Samuel Beckett or Eugène Ionesco. The plays of the two playwrights are teeming with loser characters. Unlike winners, who have no time because time is money, they have all the time in the world, so they wait and feast on the blurriness of language, sometimes pleasurably, sometimes torturously. Where others produce meaning and status, the figures of absurd theater create only nonsense — an act of liberation from the value-added and meaningfulness machine of work, in which a person is only given value if he or she makes sense.

This brings us to new leadership — a type of leadership that goes beyond knowledge and information, and toward sensing and somatic and affective empathy. As Michael Ventura, the CEO of design firm Sub Rosa and the author of the book Applied Empathy reminds us, empathy begins with presence, with self-awareness and a keen listening to our own emotions.

This is the kind of leadership embodied by leaders such as New Zealand’s prime mister Jacinda Ardern. She has hosted frequent Facebook Live chats during the pandemic. During one of her press briefings, when a reporter forgot his question upon being called on, Ardern jokingly told him that she was concerned he wasn’t getting enough sleep.

But it’s not just a communication style, it’s an entire new faculty of seeing the world that’s at display here. Ciela Hartanov calls it “sensitive leadership”: “Leaders with acute perceptual skills (including emotion detection) are the ones who are better equipped to manage through unexpected shifts,” she says. Navi Radjou and Prasad Kaipa speak of a shift from smart to wise leaders who can lead with both head and heart, and rely heavily on their intuition. This sensitive, on-heroic leader is not a master of decision-making and certainty, rather, she has a firm grasp of the elusive. “If it’s not elusive, it’s not authentic,” Jonathan Cook said.

The only way to cope with the elusive is to hold it.

Gianpiero Petriglieri writes in the Harvard Business Review that “holding” beats vision as an essential element of leadership:

“Visions work the same way whether mystics or leaders have them: They promise a future and demand our life. In some cases, that sacrifice is worth it. In others, it is not. Just as it can ignite us, a vision can burn us out.”

“When I ask managers to reflect a bit more on the leaders whose visions they find most compelling and enduring, they usually realize that none of those leaders started from a vision or stopped there. Instead the leader started with a sincere concern for a group of people, and as they held those people and their concerns, a vision emerged. They then held people through the change it took to realize that vision, together. Their vision may be how we remember leaders because it can hold us captive. But it is their hold that truly sets us free.”

The new normal is the new strange

Staying in the liminal space for a bit longer, sensing and holding instead of sensemaking and decision-making, and embracing the strange and absurd — those didn’t seem like the “normal” qualities of effective businesses before the crisis. They are not the new normal now either. They are the new strange.

As we return to our workplaces, we shall heed the advice of poet David Whyte: “Anything or anyone that does not bring you alive is too small for you.” This pinpoints the new mandate for leaders and businesses:

To bring others alive.

This article is based on the Living Room Session, “The Quest for New Value,” hosted by the House of Beautiful Business on May 8, 2020.

View all upcoming Living Room Sessions and sign up for free.

Living Room Sessions are part of a Residency at the House of Beautiful Business, a global think tank and community with the mission to make humans more humans and business more beautiful.

This article first appeared on Psychology Today and in the Journal of Beautiful Business.