Andrés Iniesta’s Farewell, and How to Make Endings Count at Work

We cannot be fully human in organizations that have few rituals and little space for stillness, silence, and sadness. 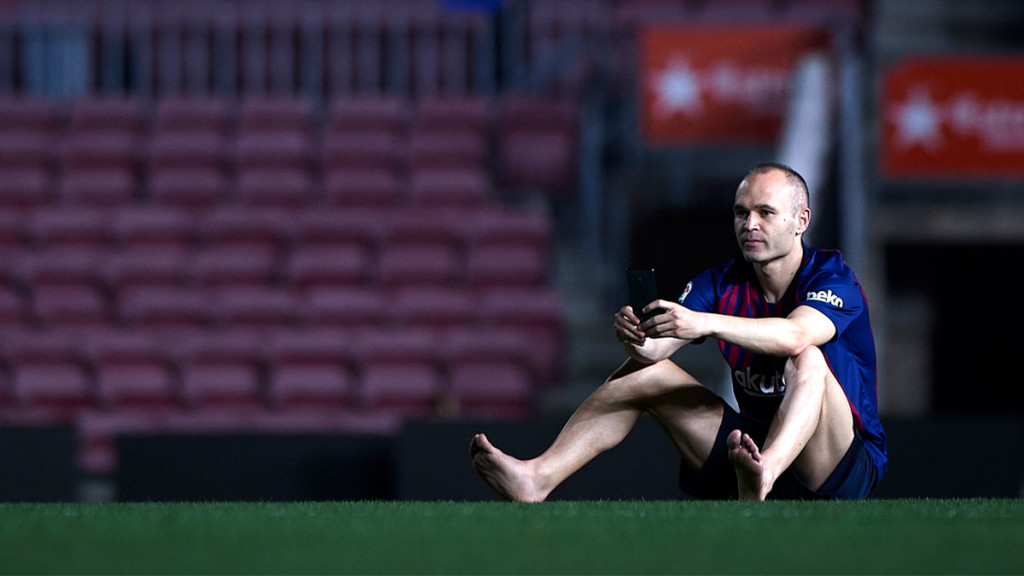 by Tim Leberecht and Gianpiero Petriglieri

The game had ended. The applause had died down, and people had gone home. His work was done, now he could rest. So he took off his cleats and he sat down. Someone took a picture, and it went viral. Andrés Iniesta, one of the most gifted and successful soccer players of his generation, barefoot, alone, on the pitch of Camp Nou, the stadium of FC Barcelona — Barca, as the fans call it — after he had played his last game for the club.

It was a striking image from an industry from which others often borrow metaphors: a slam dunk, down for the count, a home run, drop the ball. That imagery often remains focused on the moments of performance: the winning or losing, the failures and comebacks.

Iniesta’s still portrait captured a very different moment, and a far more existential one: the moment in which all that remains when the work, the game, and the show are over is a person in an empty space. A space in which the past is history and the future is yet to begin. It is a space we all visit, more or less willingly, ever more often as working lives get longer and careers more fragmented. It is common for people to change jobs over a dozen times in their lives. As Lynda Gratton and Andrew Scott note in their book on the 100-year life, some of those changes are not lateral moves or steps up. They are major career shifts.

For Iniesta, that night marked one such change. His working life will go on. There will be one last World Cup, a career epilogue in Japan, and new chapters after that. And yet, the picture did not just capture the end of a season. It was the end of an era.

Iniesta had joined Barca’s youth academy as a 12-year-old hopeful, turned pro there, and was leaving 22 years later having won more trophies than any other player in Spanish history. He had never played for another club, and helped make Barca one of those sides that make people call soccer the beautiful game.

He was one of the few players who earned respectful applause in every stadium, even from opponents’ fans, not only for his elegant brand of play but also for his character. When he scored Spain’s winning goal in the 2010 World Cup final, he took off his jersey and revealed an undershirt displaying a handwritten dedication to his friend and fellow player Dani Jarque, who had died of a heart attack the year before. “Forever with us,” it read.

Researchers have long observed that being aware of mortality makes us engage in more meaningful activities, and helps us find more meaning in our work. When we remember that our time is finite, we want to make it count. Most professional athletes, like others who have a chance to pour their whole selves into work, have the mixed blessing of dying twice, as Iniesta’s fellow soccer legend Gianluigi Buffon put it. The first is when they retire from the game that filled their lives and gave them an identity in their youth. Even those who go on to become legends must live through the ending of their first working lives.

Iniesta’s farewell was deliberate, emotional. The 90,000 people in attendance had been chanting his name from the first minute of his last game, and after the final whistle, teammates and fans honored him with a long celebration. After the party ended, Barca let him stay behind in the empty stadium. He sat in the center circle of the pitch where he had stood victorious and defeated, resting, reflecting on a long career. He eventually left at 1 AM.

It was the rarest and most meaningful of endings, different from the rushed and placeless ones that mark, or fail to mark, many career transitions. That is why the image captured people’s imagination, perhaps: It portrayed him still, alive, in the space between two lives.

This is why we cannot be fully human in organizations that have few rituals and little space for stillness, silence, sadness.

Scholars have a name for that space. They call it liminality, from the Latin limen, or threshold. It is a state of mind and a social space in which we are betwixt and between. Regardless of your line of work, it is easy in such moments of suspended animation to feel lost or stuck. But when we have rituals to guide us, and spaces to hold us, suspended animation turns into animated suspension — a pregnant pause between old and new selves.

In an insightful piece on liminality in contemporary careers, Herminia Ibarra and Otilia Obodaru argue that in the modern workplace, liminality is no longer a momentary state. It is a chronic condition. We are always, at least potentially, on the move.

To own our loneliness while feeling our place is rare at work these days. It is much easier, and more common, to feel our loneliness as we strive to find a place. And yet we are all alone, in the end, or in between, Iniesta’s picture suggested. We are just not all so alive.

His farewell is a reminder that it’s easy to feel alive and have a place when the game is on, but unless we can be just as alive, and have some space, when the game stops, then we are not athletes but pawns — of ambition, incentives, or both. This is why we cannot be fully human in organizations that have few rituals and little space for stillness, silence, sadness.

At many workplaces, we often lack the rituals and spaces to end projects and tenures. We don’t speak of “suffering through a game,” as soccer players often do when they describe their efforts. We reward active emotions such as joy, happiness, and enthusiasm — or even frustration and anger, as long as they keep us going. We reduce love to “love what you do, and do what you love,” but we don’t make much space for those hours or days in which love breaks our hearts. We want our passion focused on performance. We don’t want it to end.

We struggle with endings most of all, with professional and actual deaths. But a working life without endings is like a story without punctuation: The more it goes on, the less it makes sense. If we are to be more flexible in the workplace, if we are indeed going to be perpetual beginners, then we need to become much better at endings, and so do our organizations. Work can’t be meaningful if we can’t honor endings and if we are not offered spaces to do so.

The designer Jan Chipchase, for example, conducts decompression camps after intense projects to truly give meaning to the term “post-mortem.” Priya Parker, who advises companies on how to gather more meaningfully, suggests rituals that enable public intimacy, like Renaissance Weekend’s “if these were your last remarks” closing session. Professional endings can be exuberant, like the send-off celebration for retiring Net-a-Porter CEO Mark Sebba, or earnest, like the parting U.S. president’s helicopter takeoff into the unknown. What matters is that a career chapter “doesn’t just stop, it ends,” as Parker puts it.

Barca’s motto, “més que un club” — “more than a club” — indicates that its ambition transcends mere competition. Winning is not enough. Barca must win in style. This past season, while the club won the Spanish league and the King’s Cup, Barca’s fans were not content, because the team rarely exhibited the beautiful soccer it is synonymous with. However, they put disenchantment aside to bid Iniesta farewell. Once the party was over, keeping the stadium open for Iniesta served no practical function. It made Barca no profits and won it no points. But it was in keeping with its ethos, its style. That night, the club lost one of its top players, and won its fans an indelible memory: an image of raw humanity connecting them to their own. That is the power of organizations that take endings seriously.

This article was originally published by Harvard Business Review on May 30, 2018.