A Tale of Two “Third Places”

When We’re Alone Together, Are We Leaving Community Out in the Cold? 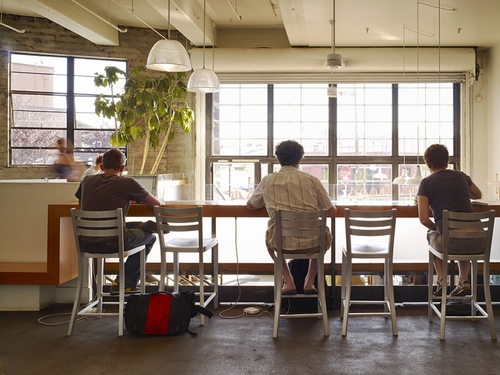 When you stroll through San Francisco’s Mission District these days, throngs of young knowledge workers laboring in coffee shops are a common sight. Some of these digital nomads are working on their first start-up, some on their latest; others are freelancers or employees working remotely (unless they’re with Yahoo!, that is). In ergonomically dubious postures, bent over their laptops, they spend several hours or entire days in these cafes, purchasing a cup of coffee or two and maybe a sandwich for lunch as the modest entry fee.

Just over a mile to the east, in the Potrero Hill district, another rapidly gentrifying neighborhood,Coffee Bar serves as the epitome of this new workplace culture and the social etiquette that comes with it: young techies, heads down, ear plugs in, sit on stools lined up like birds on a wire, fully immersed in going after their business. Only occasionally they lift their heads if a new guest arrives on the scene. There are a few meetings going on, but mostly, no one speaks, as if to underscore the notion that today’s start-up entrepreneurs are indeed solopreneurs, together alone and alone together, to borrow Sherry Turkle’s phrase. Succeeding the knowledge worker’s open offices of the past decade, places like Coffee Bar are the factories of the purpose economy, fueled by personal passion projects, a strong quest for autonomy over one’s work, and imbued with a global sense of community that transcends the locale.

Contrast that to Flushing in Queens, New York, where a recent dispute between the manager of a McDonald’s restaurant and a group a group of elderly Korean patrons made headlines. The store manager became wary of the elders spending too many hours in the store seated at tables and only drinking coffee. The tensions escalated when the store manager bumped the group from the site, claiming that he was losing money because they were occupying seats he would rather give to better-paying customers. The Koreans claimed they had nowhere else to go. Without family to serve as a social nucleus, the nearby McDonald’s was the most convenient location for fostering connections. After a few weeks of heated emotions in the community, the conflict was finally settled, with the store manager agreeing that the elders could sit at the restaurant for as long as they wanted, except during high customer-traffic hours from 11 am to 3 pm.

But the episode had struck a nerve. When it was discussed in The New York Times and on local blogs, some online commentators suggested “solutions” such as installing uncomfortable seats that would deter the elderly, or other nudges from the playbook of behavioral economics. In a way the ensuing debate mirrored, at a smaller scale, the current tensions between technological “solutionism” (as Evgeny Morozov calls it) and the civic fabric in the Bay Area, where the lines between public and private space are being renegotiated in the face of an influx of high-earning tech workers and skyrocketing costs of living.

Comparing the two venues, a coffee shop has a lower entry price than a fast-food restaurant, which is not first and foremost conceived of as a space for community but rather for convenient purchases and short stays, as an efficient, transactional environment. What is considered “hanging out” at Coffee Bar is stigmatized as “loitering” at McDonald’s. As far as clientele is concerned, Coffee Bar is a place for optimizers, McDonald’s is one for maximizers.

Intentionally or not, however, both places serve as what the urban sociologist Ray Oldenburg called the “third place” — an alternative location for the grey zone between home and work, a semi-public and semi-private space that serves us as both consumers and citizens. Oldenburg envisioned it as a home away from home, where the main activity is conversation.

The elderly, blessed with too much unproductive (by conventional measures) time on their hands, are neither maximizers nor optimizers. They need a third place like no one else. Would the Coffee Bar accept their hanging out there every day? In fact, what would happen if anyone just sat there for hours staring out of the window or reading the newspaper, with no devices or other totems of connectivity, no signs of productivity at display? Would you be quietly judged as a slacker or even banned from the site because of breaking a secret code?

In any case, the San Francisco Coffee Bar and the Queens McDonald’s, these two very different “third places,” point to a stark irony of our time: we seem to create an abundance of hang-outs for those who are thinly everywhere, but fail to create them for those who have an abundance of time and no other choice but to be thickly in just one place. What we need are “third” third places — spaces that tolerate a thick presence outside of the social and economic codes imposed by connectivity and efficiency, and that nurture the diversity that is so vital to our urban fabric. In addition to the business and its patrons, we need a place for this third party — the non-transactional guest, the visitor, the community at large.  We need more third places where third parties are welcome.

This post was first published by Means The World.