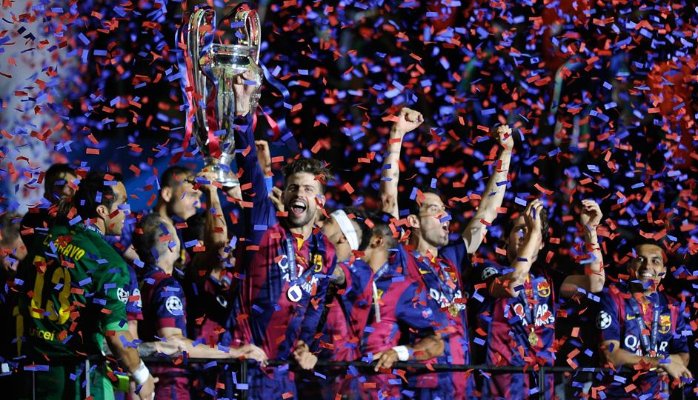 As I’m writing this, I’m watching the game for the third time: Futbol Club Barcelona(or Barça, as the fans call it), the world’s best football club (I’m going to stick with “football” and not “soccer” here, since it’s in the club’s name) winning the Champions League, football’s most prestigious international club trophy.

The victory over Italian champions Juventus Turin in the final this past Saturday in Berlin made history. The trophy was Barça’s third of the season and completed the “treble” (in addition to winning the national Spanish title and the Spanish King’s Cup or Copa Del Rey). No other football team has ever won the “treble’” twice. It took a record-breaking run to achieve this remarkable feat. From the 60 games Barça played this season, it won 50. No football team has ever had such stats. As I’m marveling at these numbers and Barça’s dominance on the field, I’m wondering about the factors of such consistent exceptionalism.

What can businesses and their leaders, what can other high-performance teams learn from Barça, from its style, its culture, and its coach, Luis Enrique?

Enrique, a former Barça player, was met with skepticism when he started his tenure at the beginning of this season. Barça was in a bad spell and hadn’t won any major trophies the previous year. After dominating European football for almost a decade, the team seemed to have lost its mojo. And for Enrique the year started off rocky, with rumors of a fall-out between the coach and his players, legal issues haunting the club, and other distractions off the pitch. And what did Enrique do? He had a plan and stuck with it.

Yet as the season progressed, he grew smarter at executing it. He became more skillful at managing his star players and their not insignificant egos, and that proved to be a crucial tweak. The “my way or the highway” machismo of his initial months, perhaps borne out of the fear of not being respected in the locker room, made way to a more relaxed approach. Enrique started to lead by being led, giving up some authority and control in exchange for the team’s support and cohesion.

Star players like Neymar or Messi want to express themselves on the pitch and need the freedom to do so. They are ultimately more important assets to the club than the coach and are well-aware of their power. So it might not have been entirely his own choice when Luis Enrique followed his three strikers’ lead as they decided to swap their default positioning up front. But it was effective. What is evident in sports serves as a good reminder for business leaders, too: at the end of the day, you’re not on the pitch. Let them play.

2. Stay true to the philosophy (just make some tweaks)

Many leaders suffer from action bias. If the results, typically by quarter, are not as expected, there is a rush to question everything and drive wholesale changes. Often this results in a zig-zag course that is hard to stomach for employees. “We cannot afford a culture like this,” or “These principles are nice to-have when the numbers are good” are typical boardroom folklore. When the going gets tough, ideals, values, and principles are often sacrificed for more “pragmatic” actions.

Barça is no stranger to these pressures. Just a year ago, many declared the Barça dynasty to be over and the team’s signature style, possession-based combination football—“tiki-taka”—to be outdated. The players and their coach, however, never bought into this argument and maintained that the style some of them had adopted early on in Barça’s own youth academy was so engrained in the club’s DNA that it was anathema to revamp it. When Enrique came in, he courageously refrained from staging the revolution that many had pushed for. Instead, he kept the core philosophy intact, integrated new players into key positions, and addressed some of the team’s tactical weaknesses, for example, a poor record in defending set kicks or an underutilized counter-attack.

The result was an enhanced version of Barça that possessed more tactical flexibility while maintaining and refining its homegrown style. Efficiency, physical strength, and pragmatism were new tools in Barça’s repertoire, but not as ends per se but rather levers to strengthen what Barça had always been about: poetry, joy, and the “beautiful game.” Winning for the sake of winning was never the point. To Barça fans, winning (or losing, for that matter) with distinction, with class, always mattered more than the mere collection of titles. Winning was only important as evidence of the supremacy of Barça’s style.

3. Anticipation or “win the second ball”

One of Barça’s key strengths is anticipation—the ability to predict the opponent’s moves and be just one crucial tick faster than them. The team presses very high up the pitch and plays a very aggressive, almost suicidal “high-line” that confronts the opponent at the midfield line. That leaves a lot of space to exploit behind the defensive line so it is critical that the players are not only quick with their feet but also with their minds, and exert a high degree of situational awareness. Come a step too late for a contested ball in midfield, and the other team might cut you wide open with a ruthless counter-attack.

In football, there is a term called “the second ball” that is used to describe the deflection or the spillage of balls that occurs when the opponent fumbles the “first ball.” The best teams like Barça have a built-in ability to win the second ball because they anticipate every single possible move, and are almost always at the right spot at the right time. This has a lot to do with experience and intuition, but also the collective intelligence of the squad and how their roles are hardwired into them.

Business leaders can take a page from this example: “Press” as a team, that is, make sure everyone is proactive and entrepreneurial. Be prepared for the second ball, the unintended consequence or the ripple effect of an action. It is the undercurrent, the collateral, the side-effect that makes or breaks your business. The worst and the best things can happen on the second ball, and you want to be there if they do.

True, not every team can boast a Messi, arguably the world’s best football player of all times, in its ranks. But Barça is also more than Messi. Everybody gives and receives, even the stars sacrifice themselves for the team, and surprisingly often this season they have been unselfish and even the most goal-hungry strikers passed the ball on to a teammate who was in a better position to score. Barça moves as a unit, and the interplay is intricate, on the ball and off. Football—in fact, any teamwork—is all about creating space for someone else to enter. It requires initiative but also the humility to understand the limits of one’s role, one’s active or passive impact on the game at any given time.

This ability goes back to the philosophy of “Total Football” that the Dutchmen Johann Cruyff and Luis van Gaal brought to Barcelona, and that has shaped Barça to this day. It requires every player on the pitch to master any position at any time and to “read” the whole game from any angle. In this fluid system no player is fixed in their intended outfield role; anyone can be successively an attacker, a midfielder, and a defender, so the full-backs, for example, often overlap with the wingers on the offense.

Case in point: In the play leading up to Barça’s first goal in the final on Saturday, all but one outfield players were involved and touched the ball at least once. Among your staff, you may not have a Messi, but you will count some rock stars. They are critical to your success, but your team will be more effective and more sustainable if everybody else is always connected to the outcome, if everybody else is part of the action, even just briefly.

5. Allow yourself to be romantic

Football is inherently romantic. Now, granted, it has gotten a bad rap lately because of the sinister machinations of FIFA, the global football governing body. And in the previous season even Barça’s brand—its aspiration to be “more than a club” (“mes que un club,” as the club motto goes) and celebrate universal values of sportsmanship, integrity, and fairplay—was overshadowed by politics and scandals. The romance was all but gone, and one could be forgiven for giving in to cynicism and conceding that, in the end, football was merely a money game, driven by the agendas of evermore powerful sponsors and their quest for commercial exploitation.

And yet, while all that is fair, I would argue that the romance lies in the “in spite of.” It takes two to tango. One must romanticize to earn romance, one must offer the space onto which to project it. And isn’t it the very essence of romance that we defy reality and insist on the possibility of another, a better world, constantly seeking it even in the midst of the profane? George Bernhard Shaw said it best: “Better keep yourself clean and bright; you are the window through which you must see the world.”

In this sense, Barça is a deeply romantic club, a romantic brand—not because it is perfect or above all the noise all the time, but because it insists on being better. It doesn’t mean that it always lives up to its lofty principles. But the idea at its heart is so powerful that it shines as a lodestar, despite all its imperfections. Like the Olympics, Barca is what we make it, what we want it to be—it offers us a powerful space for imagination. It is a great truth because it feels like one. It gives us great joy and exquisite pain. That’s what great leaders, great brands, great organizations do to us.

This article first appeared on LinkedIn.