It was always going to end in tears. 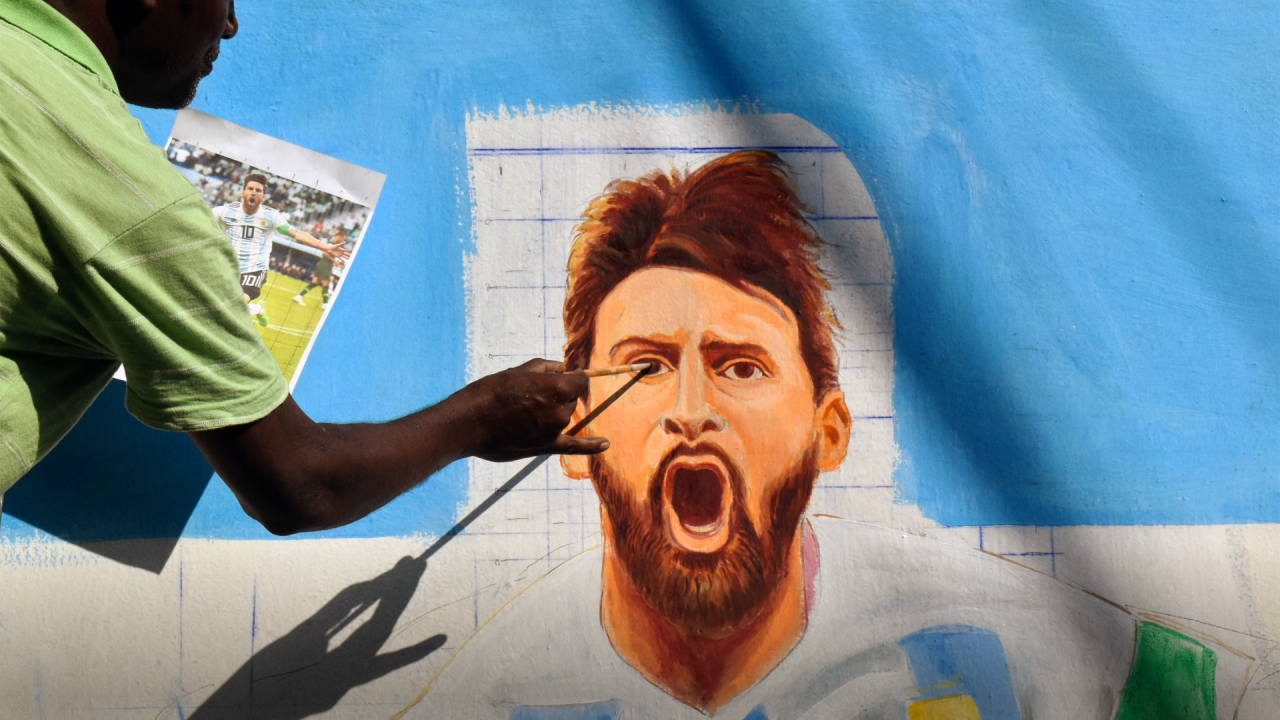 It was always going to end in tears.

Argentina won the World Cup, the first time since 1986. Their captain, Lionel Messi, finally earned his crown as the greatest footballer of all time (as well as, more controversially, an Arabic bisht). I would have cried regardless of whether Messi’s team won or lost, simply due to the magnitude of the moment, and the strength of the mixed feelings—they are always mixed, as research on “emotional diversity” teaches us—that overpowered me. The notion that something mattered and that, perhaps, everything meant something. Watching Messi play football has made my life better—both because he was always there, a steady, metronome-like presence for the past 17 years, and because of the countless magical moments he created on the pitch. The joy of his coronation contrasted with the end of an era.

Mixed feelings were also the predominant sentiment towards the Qatar World Cup itself. On the one hand, I appreciate the perspective of Financial Times journalist Simon Kuper (whom I interviewed about his book on FC Barcelona). He observed the tournament as a celebration of cosmopolitanism: “People aren’t just tolerant of religious difference,” he wrote, “they are tolerant of breathing in somebody’s body odor and listening to their voice messages on speaker at 1am in a crammed carriage after their own team has lost.” His colleague, Paul MacInnes, in The Guardian, struck a similar tone: looking purely through the lens of sport, this was a fantastic World Cup, with lots of twists and turns, subplots, and mini-dramas. The script wasn’t perfect, the play was.

The visionaries have no clothes

On the other hand, the World Cup epitomized the overarching ailment of our time: the market governing all aspects of our lives, and the win-at-all-cost mentality that subjugates all other ethical considerations.

2022 was characterized by evermore blatant greed—kind of like the 80ies, but without the fun. Theranos’ Elizabeth Holmes and her partner-in-crime Ramesh “Sunny” Balwani getting sentenced to jail for their fraud. Elon Musk’s ill-motivated, ill-planned, ill-executed train wreck of a Twitter takeover that should bury any glorification of his qualities as entrepreneur, leader, manager, or human being (naturally enough he was spotted at the World Cup final with Jared Kushner). Or the absurdity of Oracle’s Larry Ellison committing 1 billion dollars to Musk’s Twitter heist via text message. The biggest disappointment of all was Sam Bankman-Fried (SBF) and the FTX crash, which will hurt the legitimacy of crypto and the Effective Altruism movement he endorsed for a long time to come.

What is so depressing is not only the hubris these people (mostly men) exhibit, or their obvious lack of morality—it is the predictability of it all and their small-mindedness. Everyone from the media and management gurus, to the pundits and fans are prompting us to see the broader context, the alleged ‘vision’ or ‘strategy’ behind the behavior—but there isn’t one. Instead, there is a direct line from FIFA president Gianni Infantino to Musk to SBF to Elizabeth Holmes that lacks any subtlety and reeks of ego, pettiness, and (self-)deceit.

The affirmative power of “no”

In 2023, I hope that we get better at recognizing fraudsters and hucksters, and become more aware of what James Surowiecki so accurately described as a birth defect of Anglo-American capitalism: that con artistry is part of its DNA. Let’s speak up at the next dinner party when someone praises Musk’s genius or hails crypto as the democratic antidote to the traditional banking system. I still know more people who got lucky during the crypto heydays, bought a lavish beach house in Portugal, and now host conscious capitalism retreats in their gardens where they hand out Spirulina and advance copies of their self-help book (am I jealous about the beach house part? Yes!) than actual use cases for crypto. If you need a case against crypto, listen to Dan Olson on The Ezra Klein Show, one of my favorite podcast episodes this year.

Our greatest power as users and consumers is not to set up our own DAO: it is us refusing to take part in other people’s ‘visions,‘ especially when we can see they are toxic. “Whose imagination, if not your own, are you living in?” asks my friend and novelist Aditi Khorana, and she’s right. So in the spirit of Bartleby, the Scrivener, who politely “preferred not to,” I (finally) deleted my Twitter account this week, and so did the House; perhaps you should too?

Apropos saying no, this past year was distinguished by what did not happen: our annual House gathering, for instance. I remember having dinner with my colleague Monika Jiang, our head of curation and community, in March, on a blitz media tour in NYC, and us realizing that we needed more time to wrap our heads around the event’s concept and program in such a tumultuous year. At the House, we treat every annual gathering like a music album that demands fully charged creative batteries and passionate intellectual spirits. We are privileged that our business and our community do not solely depend on this one main event, and yet it was a tough call. Some of you were disappointed by our decision, but most were supportive.

We used the freed-up resources to conceive of and run a number of smaller events, for example our series of Beautiful Business Trips, the online and in-person experiential learning programs we launched together with our long-time partner, the BCG Henderson Institute. These included “Lead from the Heart,” “The New Politics of Business,” “Navigating Uncertainty” (led by the prolific dancers and choreographers John Michael Schert and Brett Perry in Berlin), and, in Barcelona, “How to Become a Beautiful Business Thought Leader.” Furthermore, with our partner Hotwire, we pioneered a new format: a community-run asynchronous online conference that convened more than 2,000 people over several weeks to explore how to make Web3 (minus the crypto fad) more beautiful.

The pedagogy was different for each of these trips, but what they had in common was an open-minded and insatiable curiosity for the unknown—and a willingness to learn from, and with, each other without a demand for an immediate return or outcome.

We also used the time to bring the House to organizations and conferences, for example with the “90 Minutes of Beautiful Business” program that made the three main tenets of beautiful business tangible: emotion, imagination, and curation. We produced the premiere version of “90 Minutes” for the Volkswagen Global Top Management Conference in Lisbon, under the patronage of incoming CEO Oliver Blume, followed by a number of shows we tailor-fitted for a movie theater at LinkedIn’s Talent Connect conference in Los Angeles. In 2023, we are keen to build on the success of the “90 Minutes” program and establish “business theater” as a new genre: learning and development programs as entertainment. Dreaming of the life-centered economy

We will premiere a further iteration of this idea at The___Dream, our first big gathering after a one-year hiatus, “the world’s most beautiful business festival,” taking place in Sintra, Portugal (30 minutes north of Lisbon) from June 2-5, 2023.

We chose the theme carefully. 2022 was an odd, uneven year that never really recovered from its initial blow: Putin’s murderous invasion of Ukraine. The tremendous suffering it has caused, and its continued ripple effects, have shaken Western civilization to its core.

But there are reasons for hope: from businesses uniting against Putin and a new sense of corporate statesmanship, to the recent Fusion energy breakthrough at the Lawrence Livermore National Laboratory. And while geologists are now officially marking the Anthropocene (an epoch that began with humans altering the planet with industrial and radioactive materials in the 1950s), many of us are moving on to a more promising future in the shape of a new life-centered economy.

Philosopher and post-human activist Bayo Akomolafe conjured up the concept during our “Unbusinesslike Nature of Business” learning journey. Colin Averill, for example, explains it by taking us into the mysterious world of microbiology, Amánda Efthimiou by familiarizing us with the wonders of plant-based medicine. Massimo Portincaso by showcasing the potential of generative farming. Andres Roberts, the founder of the Bio-Leadership Institute, by teaching us the new nature-like qualities of leaders. Björk by turning it into music that’s like frozen volcanos ready to erupt. And Accenture Song by describing it neatly in their on-point Life Centricity Playbook.

Many of these voices will be at The__Dream, where our goal is to gather the most inspiring and impactful ideas for the life-centered economy and synthesize them into an irresistible experience that will move leaders to return to their organizations and lives—and change everything. The life-centered economy is a rebirth. This is why we will begin with doula and author Oceana Sawyer and ELDR founder Christy Knutson inviting us to experience our own funeral (you may choose to opt out of course).

The__Dream will be a midsummer night’s dream on the former estate of Sir Arthur Conan Doyle—a full-immersion simulation that takes place in the real world, a place that is rowdy and quiet at the same time. A place to dream big, unabashedly, but with practical implications. A place to reflect on how the future of business lies outside business.

We will begin this conversation early next year, from January 16-19, 2023, at the World Economic Forum’s Annual Summit in Davos, where we’re hosting a series of sessions about “The Art of Business” together with the SAP Intelligent Enterprise Institute and La Zuleta at the Heimatmuseum, a haven of warmth and intimacy amidst the Davos frenzy. DM me (but not on Twitter) if you are there and would like to attend.

The Art of Business is in essence The Art of Communicating, and this year’s end is a fitting time to (re-)read Thich Nhat Hanh’s eponymous book, which a friend of mine sent me this week. “Everything is food,” the Buddhist monk writes, and urges us to make sure that with each interaction, each communication, we nourish the other person.

This article was originally published in the Beauty Shot newsletter of the House of Beautiful Business.