Romantic Notions Of The Startup Life

An author and marketer brought entrepreneurs together to talk about how ideas from 19th-century Romantics could enhance today's workplace. “Romance is the Ultimate Disruptor” underway at Huge HQ.

The world of startups and technology is loaded with romantic ideas. Tim Leberecht, a marketer and author of The Business Romantic, came out to Huge to lead a discussion about romantic ideas in the world of business and how older notions of emotions and mystery can enhance work.

The romantic ideas about technology are those of being outsiders, disruptors, creative and maybe even coming from a somewhat tortured place. Leberecht is quick to point out that the romance he’s talking about isn’t of the OkCupid variety, but an older idea, from 19th-century poets like Lord Byron and Samuel Coleridge. We’d argue that the tech community has a pretty strong handle on the notion of meaning, emotion and work, at least rhetorically.

The conversation covered a lot of ground but the throughline we saw was the idea of emotion’s importance in work and how maintaining that emotional spark can make the work go best.

It featured three panelists, led by Leberecht: Alexa Clay, an author and cofounder of a collectivist agency; Christopher Chavez, an entrepreneur reviving the notion of guilds (who wrote about the event on Medium); and Tolulope Ilesanmi, founder and cleaner at Zenith Cleaners.

A few big thoughts that arose from a fairly wide-ranging conversation:

Her work focuses a lot on hackers, outsiders and rebels who, in her words, “hack the social contract.” One sign of Clay’s point: the startup culture. Founders often gets mocked for their emphasis on disruption, but, at the same time, technology really has disrupted some industries and made some services more broadly available at a better price. For example, taxi medallion prices have been dropping.

What’s the core of work

Clay and Ilesanmi both talked to some level of reflecting on the basics of work. Ilesnmi talked about cleaning as a practice. His company both actually cleans spaces but also offers team-building trainings where cleaning is used as a metaphor. “My basic desire for everyone is to go back to what’s true, what’s real,” he said. He spoke a lot about work returning to its basic elements. Clay described meeting with founders and asking them, “What’s the existential meaning of that piece of entrepreneurship you’re bringing into the world?”

The courage of someone to set out on their own and start something is celebrated a lot today. Chavez said starting a company with partners was one of the scariest things he’s ever done; however Leberecht pointed out that finding love again and again can also be difficult but rewarding. “Don’t understimate how much courage it takes to stay put,” he said, to grow within an organization and keep that institutional memory intact.

Leberecht argued that every hundred years or so, someone identifies a period of disenchantment. If that’s the case, we are roughly due. He asked the panel if they thought people were, broadly, becoming disenchanted by a time when technology is measuring everything.

Clay said that digital technology is like the early days of LSD. It’s getting handed out to everyone before we really understand its effects. One example she gave: friends who chart their online dating partners with Excel spreadsheets. Clay expressed her own dislike for the notion of the quantified self. Chavez, however, challenged that, saying that disenchantment comes from placing too much meaning in our tools, rather than understanding that they are just tools. It’s up to us to provide meaning. 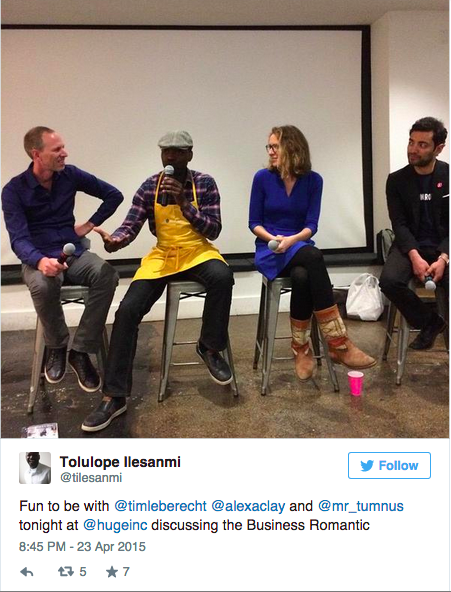 Leberecht said he’s met a lot of people at purpose-driven companies where employees feel good about their work in abstract, but less good about it in practice: they’re bored by the less competitive, less driven culture.

In that way, the dark side of a McKinsey or a Goldman-Sachs can be alluring, he said. Ilesanwi said that moving from being an IT professional to someone who referred to himself as a cleaner was an involved emotional process for him. “There’s a difference between being the owner of a cleaning company and being a cleaner,” he said. He’s embraced the identity of a cleaner, however, despite how people react to it.

On the flip side, the tension between those two identities is where he finds creativity. “I don’t like the business of cleaning,” he said, “but I love the act and metaphor of cleaning.”